Our Day with the Jr. NBA 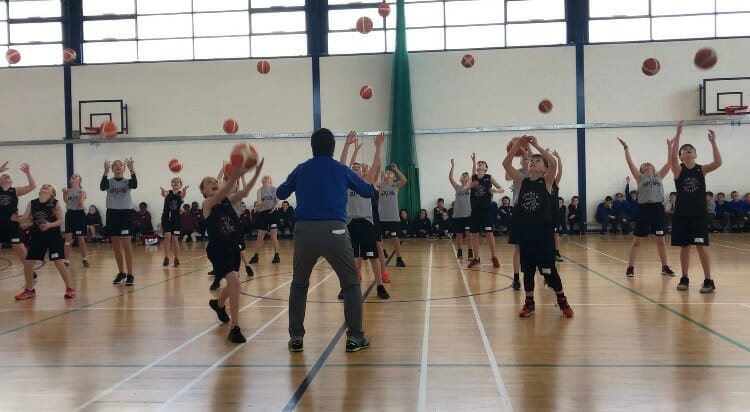 The Jr. NBA is officially here in Ireland! Marisa and I were recently invited to help out with Athlone Basketball Club’s Jr. NBA game and what a day it was. For those that don’t know, the Jr. NBA aims to positively develop children through basketball, helping to instill a lifelong passion for the game. There are 10 clubs involved in this program, each working with 3 primary schools to have a total of 30 teams throughout the country. Each team, made up of 11-12 year olds, is even provided with team-branded uniforms for games.

The three hour event started with the two teams putting on a mini skills-and-drills showing for their classmates. This mostly consisted of dribbling, layups and passing drills. With up beat music booming throughout the gym, the coaches were even getting spectating students into it with dancing, cheering, and even a little bit of the wave coming from the crowd. It was so fun to see the kids cheering on their classmates, almost in awe of what they were doing with their basketballs. The excitement and pride could be felt from both participating schools. Before tip-off, we lined the teams up before announcing the teams’ starters. One of Athlone’s coaches went through both rosters, announcing the starters one by one adding in improved fun facts that had everyone laughing. It was so cool watching these kids feel like super stars as they ran through the line of their teammates and giving everyone high-fives. For a lot of these kids this is the first time they have ever experienced something like this. Seeing all of the pure joy and excitement really brought me back to when I was a kid and first starting my journey as a competitive basketball player.

I am so happy the Jr. NBA has begun a league in Ireland. I think this program is great for the basketball community, especially in a country like Ireland where basketball is growing and expanding every year. Not only does it give those already playing a chance to be apart of the league, but playing in front of their classmates generates more and more interest in the game. It also creates lifetime fans, as kids will begin to form a certain attachment to their own teams which will correspond into a fan base for other NBA teams. The day we spent with Athlone’s Club working with the Jr. NBA will definitely be an experience I carry with me for a long time. Basketball is growing quickly in this country and this is a perfect example of this growth. Programs like this and Sport Changes Life will shape the future of basketball in Ireland, and from what I’ve seen, that future is looking bright.