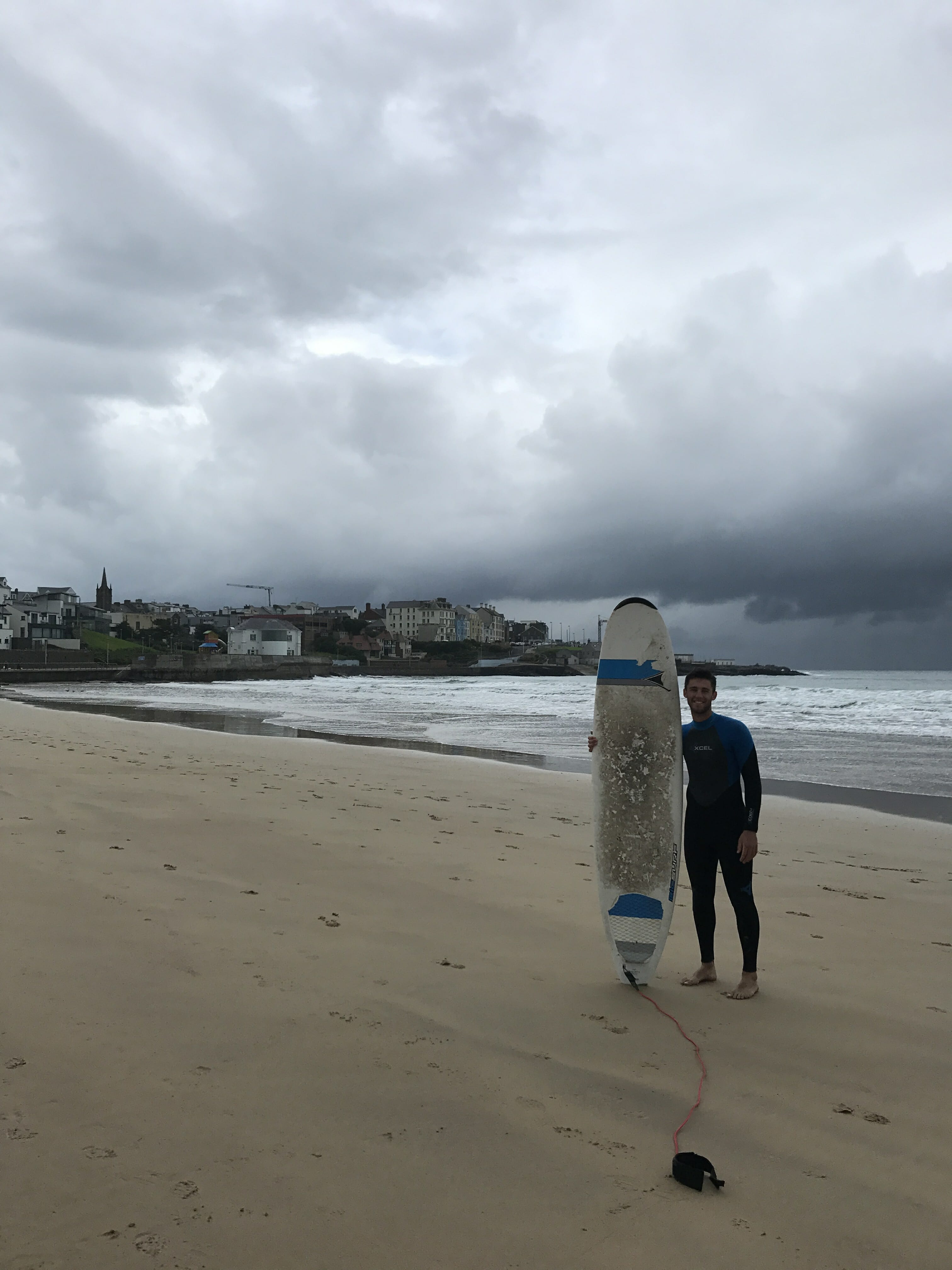 From a young age, surfing has been one of my favorite past times. Growing up in rural Virginia, you kind of had to learn how to surf. It was either that or ride the tractor as your hobby. I wouldn’t say I’m very good…. but for what I lack in skill, I make up for in style and embarrassing wipeouts. As a kid,my family would take my brother and I to the “Virginia Beach Surf Camp” every summer, which often ended in sunburns and a gnarly belly-rash. But that never stopped us from “shredding” the ½ foot waves our little Virginia Beach had to offer. It instilled a love for surfing that is still very much alive in me today.

Last summer, I researched endlessly whether or not it was possible to surf in Ireland. In short, the answer is an astounding YES. There are places all over! After arriving in Belfast on my first day abroad, I had lunch with Sam Woodside, our program coordinator. He told me about a nice little surfing town an hour or two north called Portrush. That night, I talked to my 6 new scholar friends and asked if anyone wanted to venture up north to try our luck surfing. The other basketball scholars decided they would come along to see the town, but were not too sure about getting on a surfboard. When the time came, only one scholar, Jenna Kaufman, was brave enough to join. After an hour-long train, we finally arrived in Portrush. It was cloudy, but fortunately the rain had held off up to that point. We wandered down the street and found a little surf shop called “Woody’s”. Inside, we met a friendly manager who grew up in Portrush and had been surfing the local beaches for over two decades. At first glance, I could tell he was skeptical that we were up to the task. “Are you guys suuuure you want to surf? It’s pretty cold out there… and the waves are kinda big.” We insisted, and he rented us a pair of wetsuits and long boards. Off we went to the Portrush beach!

It was hilarious walking through downtown Portrush in a full wetsuit holding a 10-foot surfboard. I think it was pretty obvious we were clueless Americans getting into trouble. But somehow, we found our way down to the beach and didn’t hesitate to jump right in. The scenery was unbelievable- a beautiful town to your right, bright green mountains to your left. Jenna was so brave and stood up on a couple waves. Pretty cool to say your first time surfing was in the Irish Sea. No big deal.

After we had both caught our fair share of waves, the real Irish weather started to kick in. We had to make the half-mile trek back to Woody’s in full-on hail and 40 MPH winds… The air was so cold we both wanted to jump back in the ocean to warm up. But eventually we made it back, got changed into some toasty clothes and hit a café for some hot chocolate. Best cup of cocoa I’ve ever had…

If you told me this time last year that I would be venturing to Portrush, Northern Ireland to surf with a new group of friends, I would not have believed you. One of the main reasons I applied to the Victory Scholar Program was to step out of my comfort zone and create experiences that will last a lifetime. I will never forget my adventure in Portrush and hope to make it back soon. Hopefully no hail this time! 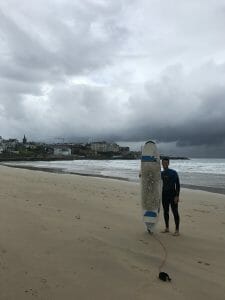