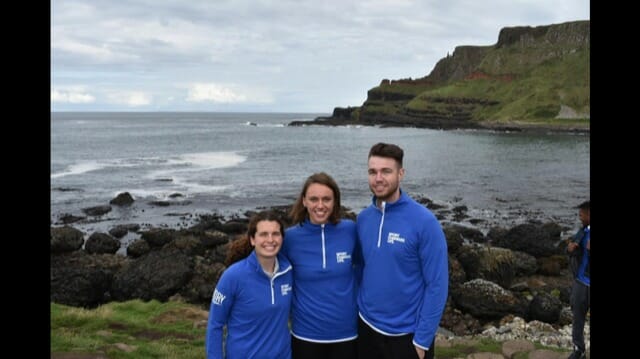 About a month before I left, I started to get pretty nervous about traveling across the country. I was incredibly excited to go to Ireland and get to mentor, study, and play, but I was uneasy about transitioning in a new culture.

My parents and I embarked on a long 15-hour road trip for the Victory Scholars launch event in New York. Every few hours it would hit me that I was leaving the country for a whole year. My mom wouldn’t be coming to all of my games like she did in college, and I wouldn’t be just a 4.5 hour drive from home. As a true Chicago woman, I had never been to New York. So, my parents and I started our travels early in order to see the sights in the city. We trounced about the city until our feet hurt and took advantage of the opportunity to see the 9/11 Memorial, Statue of Liberty, and Ellis Island. We journeyed to West Point to visit my cousin, who is entering his second year at the university. West Point was breath taking and truly a place embedded in American history. It was amazing to be able to spend some quality time with my parents before embarking on my journey to Ireland.

When I woke up in the morning on August 24, it was almost surreal. I had been waiting for this day to come for months, and the day had finally arrived. My parents and I reported to Marist College, and I began to mingle with the other scholars. I could tell that some of the other scholars were just as jumpy as I was, and seeing their nervous smiles gave me comfort. The launch event was incredible. The speakers exuded passion, and I could tell that everyone involved in the program was extremely dedicated to the mission of Sport Changes Life. Gareth and his daughter took some time to chat with my family and I, and I remember thinking that it was so cool that the CEO and his daughter took time to talk to me at the launch event. In this moment, I knew that I was not only going to be a part of the SCL program, but rather the SCL family. Some of my nerves instantly faded away, as I knew I would have another support system to turn to in SCL.

In the blink of an eye, we said our goodbyes, hopped on a plane, and arrived in Dublin on the morning of the 25th. The jet lag hit us hard, but we had a booked day of training in Belfast to keep us awake! The SCL staff had us play basketball to keep us alive and moving. It’s safe to say we were definitely not at our best!

I learned a lot during training week. We were exposed to the R City program, which aims to bring together kids from different backgrounds and enhance their personal development. I read a little about the religious tensions and history of Ireland before coming over, but it was still surprising to hear about the religious tension that still takes place. I saw how programs like R City and Sport Changes Life can really help bring kids together and help them realize that they have more similarities than differences.

Another highlight for me was our trip to a secondary school around Belfast. We were warmly welcomed by the staff, and they provided us with tea and scones. The scone that I ate was actually one of the best things I have ever eaten. At lunchtime, I sat with a girl who confided to me that kids had bullied her in her previous school. She told me that she spends a lot of time researching other countries on the Internet and learning about other places. Apparently her classmates thought this was “dorky.” While she was saying all of this to me, I realized that I could really make an impact on kids here. I knew that she would remember what I said to her. After all, I was the funny looking American that she had lunch with on her first day of school. I essentially told her to be herself and ignore anyone who tries to put her down. Uniqueness makes the world function, and we need more kids like her to feel comfortable expressing themselves. I’m not going to say I changed this girl’s life, but I do think that I planted a seed in her mind. Working with the young people on their first day of school was definitely a fulfilling experience and one that I will remember forever.

By the end of training week, all of us scholars had become a little family. We got the chance to explore the Giant’s Causeway, and I was blown away. It was sad to go our separate ways, but we were all excited to get to work in our respective host cities.