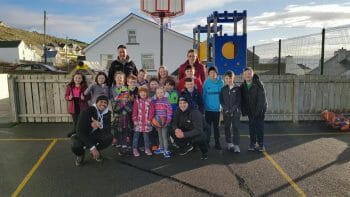 I’ve been in Ireland for 5 months now and I’ve coached in countless different locations with a variety of different types of kids but none of them were quite like my experience in the secluded beach known as Arranmore island. The journey almost never happened to begin with. It basically never snows in Ireland so when it does happen, people pretty much panic. There was probably less than an inch of snow on the ground, but schools were canceled, events called off and the roads were deserted. Yet, my coach Niall McDermott and my teammate Cullen Donavan decided to make the trek and we slowly rolled through the wild narrow roads of Donegal until we made it to the town. When I think of an island, I think of a sunny vacation spot with palm trees, but it was extremely cold, and we were far from the Bahamas, so I really didn’t know what to expect.

Our assistant coach Paul Carr was kind enough to let us stay the night with him, so we woke up bright and early and enjoyed the typical Irish breakfast which includes sausage, rashers and of course, tea. We all quickly snarfled it down and we were out the door before sunrise. We arrived at a ferry that was small, but large enough so that we could park our car on it. I’m not a morning person and we were freezing our butts off so initially I had no intentions of leaving the car at all. About five minutes into our commute all of that changed. As we floated through a valley the fog started to clear and it looked like we were going through heavens gates…the views were dramatically picturesque. We were surrounded by gaping mountains on both sides, a beautiful skyline angle of the Donegal country side, and a couple of lighthouses that looked like they were straight out of a post card. It was the type of venue that rappers might choose to record a music video, but I would’ve never imagined being surrounded by such a landscape just to travel for a coaching session. As we played Caribbean music and enjoyed the views, all of a sudden, the boat started to rock pretty vigorously. I’m not sure if the tide was getting rough or if people here drive boats just as crazy as they drive, but I’d be lying if I said wasn’t a slightly concerned at one point. Regardless, the views were worth it, and we held on tight until we arrived at the island before anyone got too sea sick.

The island itself was tiny. About 10 square miles of farmland with a handful of buildings and bunches of sheep scattered across it. There was no supermarket not even so much as a roundabout or streetlight. When we arrived at the school, we were greeted by a grand total of about 15 students. All of them had zero basketball experience but they also all had huge smiles on their face and a clear eagerness to learn about basketball. The only court they had was and outdoors and it consisted of one basket that was about 8 feet tall and a rusted rim that was hanging on by a thread. There were no glass backboards, no hardwood floors, not even so much as a 3-point line but it was easily my favorite coaching spot in Ireland. Not a single kid was wearing anything that resembled basketball gear. Majority of them wore things like rain boots that went past their knees, multi colored khakis, oversized coats and hats with bunny ears sticking out. Yet, those kids brought a level of positivity and excitement that even professional teams could learn from. Unlike many veteran players, not a single kid complained at all and every one of them did what we asked with clear enthusiasm. It showed me why I shouldn’t take my basketball experiences for granted, because so many others have much less and are still thrilled at the opportunity to participate. 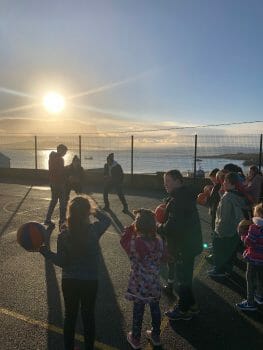 We gave them the beginners guide to the sport by explaining the rules of the game and showing them remedial skills. We demonstrated to them how to jump stop, how to hold the ball properly, where the lines on a court were and also how to dribble. A lot of their hands were too small to hold the ball correctly and most of them just aimlessly smacked the ball at the ground with two hands when we played dribble tag. Their interest in learning was genuine and while they struggled, they were able to laugh at themselves and continue trying. They were having pure fun and it reminded me of the level of care- free joy that the game of basketball can bring to those who have never experienced it. The fact that there was a sunrise beach front view within a couple steps of the court only added to how unique the coaching experience was. We continued the lessons by doing reaction time exercises and even simple catching games to work on timing and fundamentals. As a coach we were just planting the seed with hopes that the one day those kids will use the game to create the same kind of amazing memories that basketball has brought us. We were laying the foundation and if it inspires at least one kid to pick up a ball and chase a dream that they may have otherwise never considered, then that’s a mission accomplished.

After about 3 hours of coaching we finally finished and the only place that we could find that was open was (of course) a bar. As we rode back on the ferry, I felt extremely grateful to be in my position. At first, I didn’t anticipate the day to be so rewarding but that group of kids was special, and the setting of the court was one unlike any other that I’ve ever seen. The trip reminded me of the importance of keeping an open mind, because you never know how when you might have a chance to impact a life and you might even realize a thing or two about yourself in the process. Arranmore Island was truly a hidden gem and I will always be thankful to have been able reach a group of kids that I would’ve never even imagined meeting. 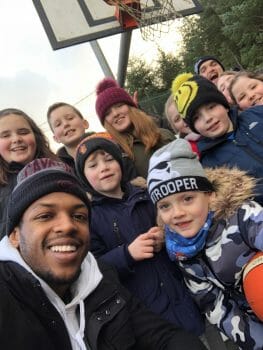