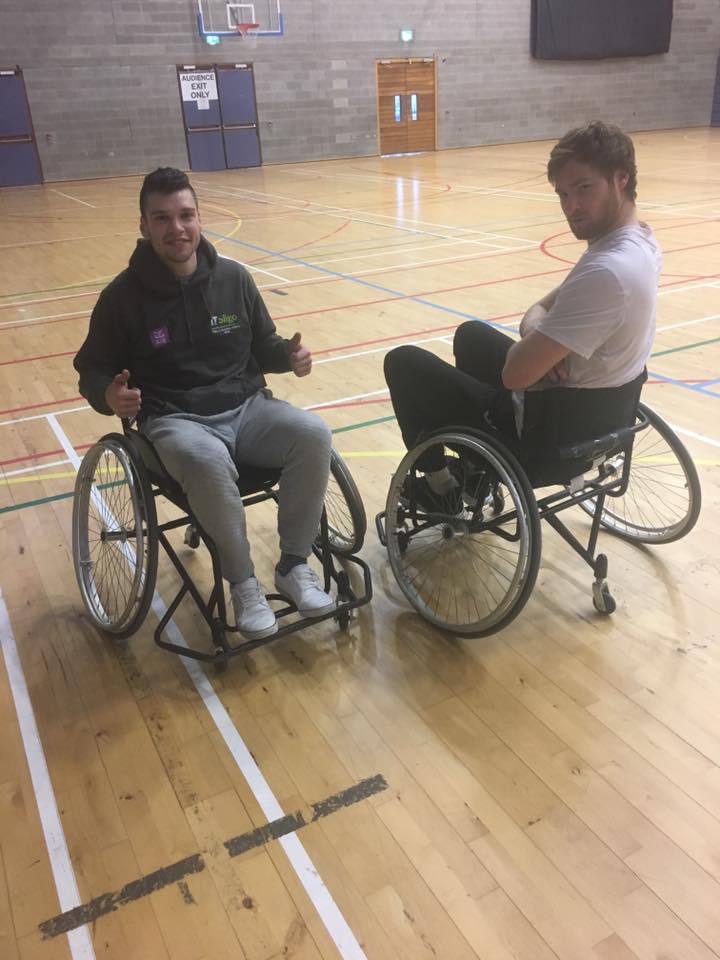 Part of coaching basketball is finding ways to break a full game of 5v5 down into smaller parts, so you can focus on specific teaching points. Working in local Sligo schools and introducing games like 21, HORSE, 3v3, King of the Hill, Steal the Bacon, Knockout, and Around the World has been one of the highlights of my year abroad in Ireland because I remember playing these games in gym class when I was growing up. Passing that experience on in a foreign culture and seeing it resonate has been quite memorable. I’ve played dozens of basketball-type games over the years, but last week I got to try a new one, and it might be my favourite.

Every Tuesday night at IT Sligo there is wheelchair basketball played in Knocknarea Arena where local hoopers of all types can interact and compete for bit of craic. Aaron, my teammate and best friend here in Ireland, has been volunteering for years and is known as a liaison between the wheelchair basketball coordinators and the IT Sligo student body. He asked Connor and I if we’d like to join him one week and we agreed to go with an open mind. This has been a year of firsts, so why not add another new experience to the list?

The rules in wheelchair basketball are roughly the same. You “dribble” by throwing the ball out in front of you and giving two big pushes, just as you would take two steps. If you take three pushes without dribbling it’s a travel. There are also similar foul calls, scoring, three seconds, inbounds plays, etc. Connor and I picked things up fast and were some of the best shooters there, just because we’d had lots of basketball experience compared to some of the other players. The basket does look about three times higher when you’re sitting in a chair than it does when you’re standing, which took a little getting used to.

My favorite part of the evening was the new respect and admiration I gained for people in wheelchairs and their ability to maneuver the chairs with precision and speed. I could shoot the basketball with the best of them, but my skills in a chair were quite outclassed. The feeling of getting a defensive rebound, turning to run the fast break, and being absolutely LOCKED up by a 50 year old woman was quite humbling for a newly retired National League basketball player. When I tried to go right, she’d cut me off. Fake right, go left? Clamps. Time after time I’d pivot around in my chair trying to break free only to realize I was absolutely overmatched, forced to pass ahead to someone in better position. I’d no option but to tip my cap to the better player.

Wheelchair basketball allowed me to meet people I would never have crossed paths with normally. It was a new way to experience the sport that has given me so much and hopefully something I continue once I get back to the United States. I will be back next week to play for sure.