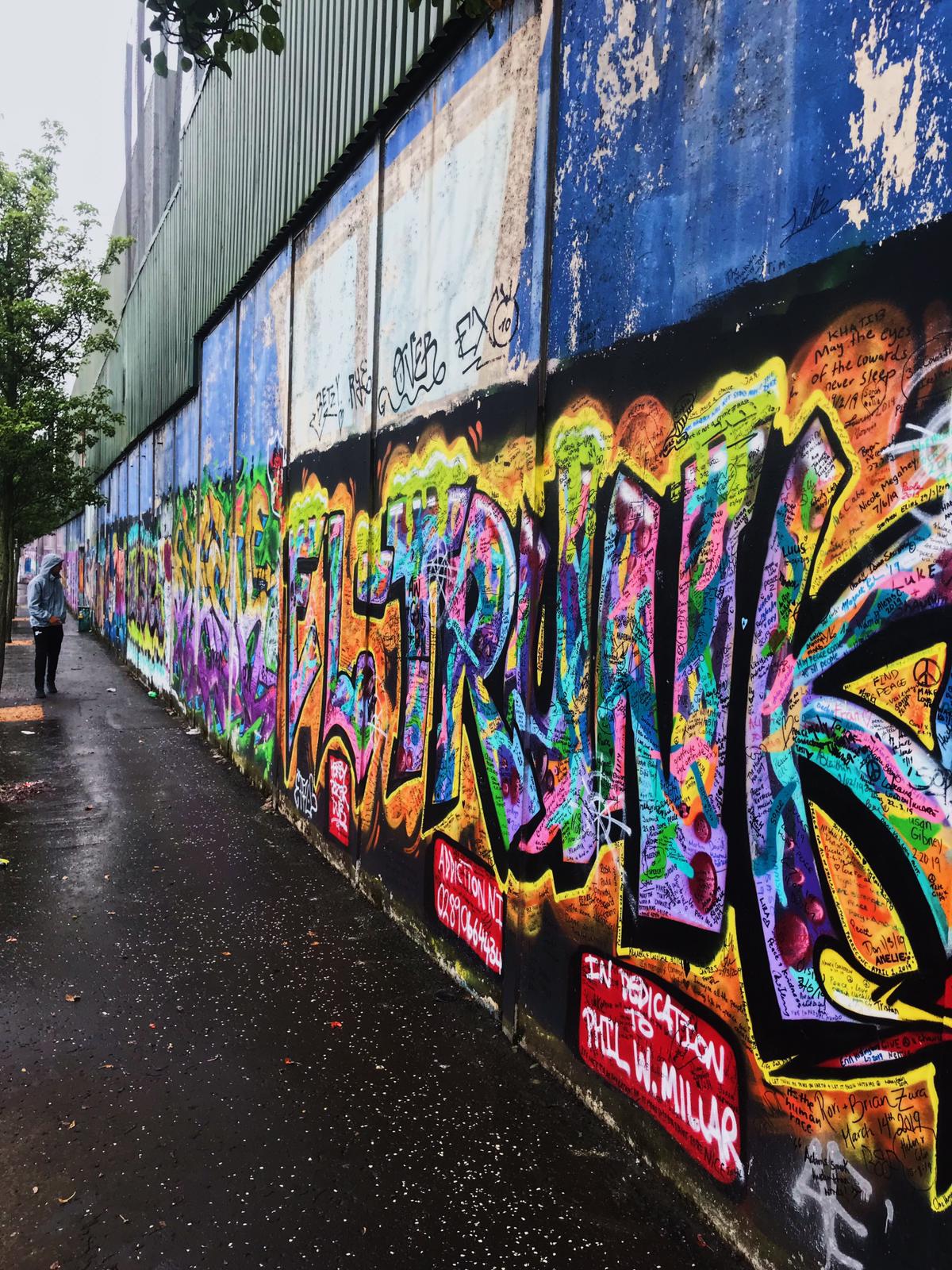 I am American, I am Latino, and I am spending a week in Belfast. So, with my first blog post this year I thought it would be appropriate to talk about walls; why we have them, and what sort of ethical dilemmas they can cause. Let’s start with Belfast:

Without getting into too much of the history behind the troubles in Belfast, the Peace Walls throughout the city serve a very ‘wall’ specific purpose; they separate protestant unionist and catholic republican (Irish republican not GOP) sections of town. These populations have violently disagreed about how Ireland should organize itself politically since the early 20th century. They block people, especially at night when the gates are locked, from going from one neighborhood to the other. But, I am not writing this blog post about what walls do. I want to start more of a moral or ethical discussion about what walls stand for, and question whether or not they are a good idea.

The best place to start this discussion is to question whether walls, or physically separating people, are the best strategy we have to prevent violence. For me, my answer is quite simply: No. In my opinion peace doesn’t come from keeping things separate. Peace comes from hard discussions with people you disagree with. We all build our own ‘walls’ around what we believe in. We look to people and sources of information that can confirm our already steadfast beliefs instead of civilly seeking out people we disagree with and having long difficult, but ultimately productive discussions.

However, bringing this back to the reality that is the city of Belfast, the Peace Walls might very well prevent day to day acts of violence. It is hard to condemn something that prevents violence. The problem with the Peace Walls arises if the two populations of the city stay completely separated. Without coming together there will never find common ground or peace. The Peace Walls are not a solution. Rather, they are a temporary and necessary reality in a city with a long history of violence.

This brings me to the southern border of the United States, and essentially the same question; Is a wall the best strategy for our southern border? My answer remains the same: Simply, no.

I want to be clear, this is not a blog post in which I will argue that open borders are the best geopolitical policy. Borders are the foundation of every nation state, and without them we could not have the global political economy. But, a wall and a border are not one and the same. I am talking in broader strokes about what the wall would stand for. In my opinion a wall would completely contradict everything that makes America great. A wall does not say: “Give me your tired, your poor, your huddled masses yearning to breathe free.” It says: “Keep out.”

I don’t want to say that not having a wall is a solution either. There are still plenty of hard conversations ahead of us. All I want to do is to urge us to have them. Let’s not hide behind our walls. Where we can, let’s knock them down.