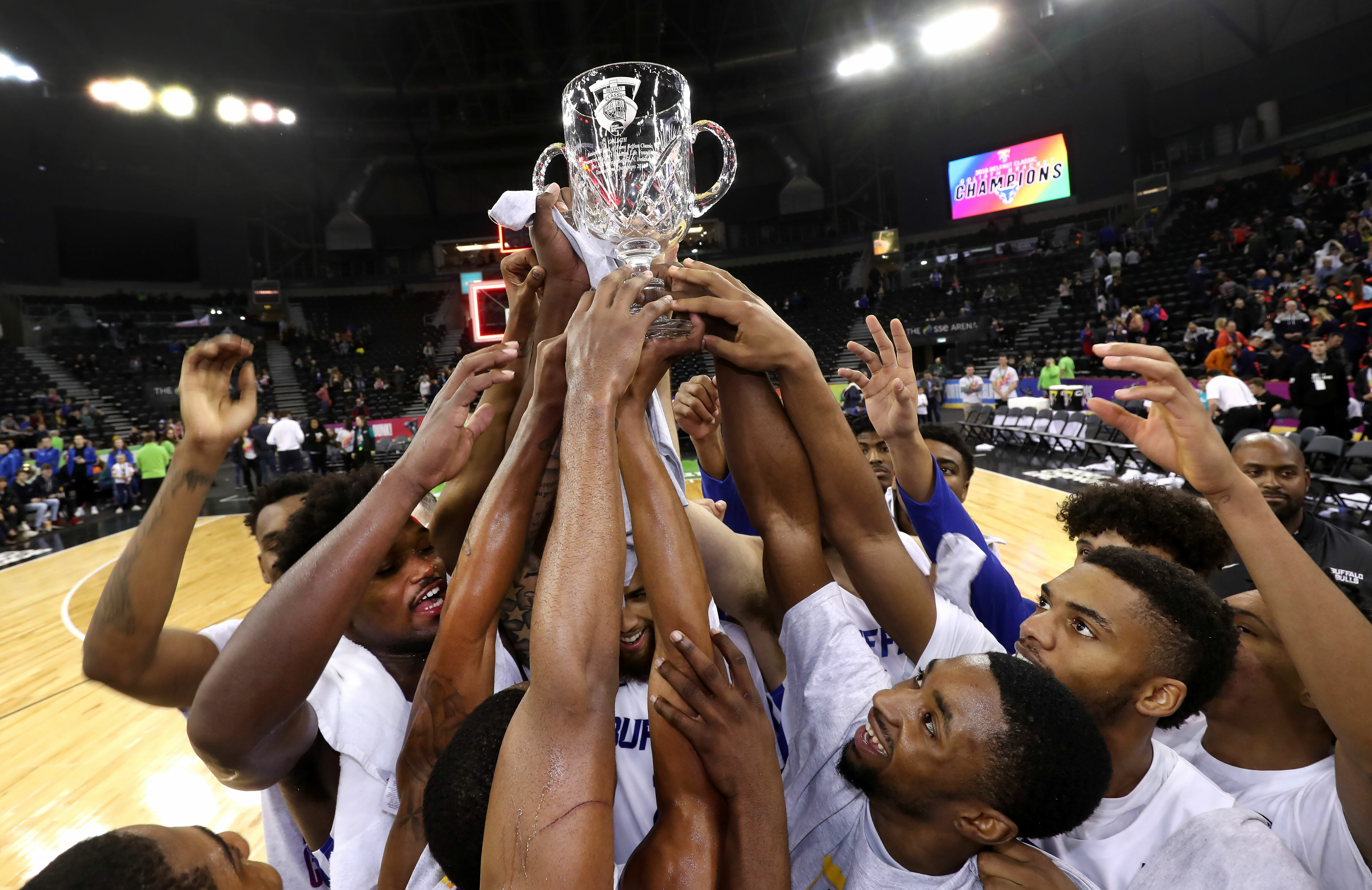 After a memorable sporting weekend for Northern Ireland, the Basketball Hall of Fame Belfast Classic came to a tense close at Belfast’s SSE Arena on Saturday evening as University at Buffalo took on San Francisco University in a championship game which kept fans guessing until the end. Thousands of basketball fans and enthusiasts from across Ireland, Britain and further afield were treated to a whopper of a finale as University at Buffalo defeated University of San Francisco with a score of 85 – 81 in the Goliath Bracket Championship Game.

The final day of competition got off to an exciting start with the Goliath Bracket Finals Consolation Game which saw University of Wisconsin – Milwaukee and Stephen F Austin State University take to the court providing fans with two tense halves of gameplay which resulted in a Stephen F Austin Lumberjacks victory of 66 against Milwaukee Panthers’ 51 points and placing third in their bracket.

Concluding gameplay today in the Goliath Finals Championship Game was University at Buffalo and University of San Francisco, who took to the court in front of an electric crowd of over 5,000 spectators at Belfast’s SSE Arena this afternoon. The game was full of heart-racing action which resulted in The Buffalo Bulls claiming the second Belfast Classic Cup, by only four points, retaining their undefeated record for 2018.

Sharing his thoughts on his team’s success and reflecting back on his time in Northern Ireland, head coach Nate Oats said, “It was a great win for us against a quality team. San Francisco is probably the second-best team in a really good league in the West Coast Conference, so for us to be able to get them on neutral floor like that and get a good quality win is huge for our programme.”

Speaking about his team’s experience at the Belfast Classic Coach Oats added, “This crowd is by far the best crowd in an EMT we’ve been in. Getting all the [primary school] kids in on a Friday when the adults are in work is an unbelievable idea, I thought it was awesome.  Even better that we got to visit the schools and then they were at the games.

“The guys running this tournament are doing it at a really high level. I thought the crowd was great, the arena was awesome, the hospitality’s been great and the city is awesome. We can only do tournaments like this every four years, but I’d jump at coming back to Belfast in four years.”

Now in its second year, the Belfast Classic was brought to Northern Ireland through a partnership with the Sport Changes Life Foundation, Naismith Memorial Basketball Hall of Fame and the Metro Athletic Conference (MAAC).

Marc Mulholland, Executive Director of the Basketball Hall of Fame Belfast Classic added, “I am delighted that this year’s Basketball Hall of Fame Belfast Classic was such a huge success once again! It was with immense pride that we were able to double the size of the Belfast Classic for 2018 and bring the tournament back to Northern Ireland for its second year. As expected, the basketball was of the highest level and was thoroughly enjoyed by all of those from across the world who travelled to Belfast to watch it live. We are so proud to have welcomed over 14,000 spectators over the duration of the tournament. Finally, we would like to extend our congratulations to Samson Bracket winners Marist College and Goliath Bracket champions University at Buffalo- and of course to all of the teams who travelled to Northern Ireland to take part in the only NCAA collegiate basketball tournament to take place within Europe.”