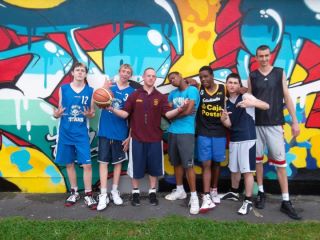 Hey guys! My name is Tim Coyne. I’m from New York and I was fortunate enough to receive a Victory Scholarship through USNI Sport which allows me to pursue a Master’s Degree in International Management at NUIG while playing basketball for the university as well as at a professional level in the Irish National League. In addition to playing basketball and going to school, I will be coaching, teaching basketball at camps and clinics, and participating in multiple community outreach programs not only in Galway, but all over Ireland, including Northern Ireland.
I played Division III basketball at St. John Fisher College where we were nationally ranked, reached the Sweet 16 and Elite 8 of the NCAA Division III tournament, and won 2 Empire 8 Conference championships during my tenure there. I graduated from St. John Fisher in 2009 with a degree in Adolescent Education and American Studies. Upon graduation I was bartending in Rockland County, NY, while starting Graduate School at Dominican College, pursuing a Master’s in Educational Technology, of which I am about 12 credits shy, and plan to finish upon returning to the States. While attending grad school and bartending, I passed my New York State Teacher Certification exams, worked as a substitute teacher, received my CrossFit Level 1 and CrossFit Rowing certification and began working as a fitness coach at CrossFit Nyack. Furthermore, I completed a course that allowed me to become a New York State certified Emergency Medical Technician.
I’m thrilled about the opportunity to live in Ireland(as I have roots in Galway), play basketball, coach, and work within the community. The few weeks I have been here so far have been amazing! I love working with the children and have had a pleasure getting to know my coaches, Matt Lint and Joe Coughlan, as well as the rest of the guys on the Galway Titans. Their enthusiasm, along with that of the kids I have the privilege of coaching, has made the transition to life here extremely fun and exciting. I can’t wait to see what this year brings!