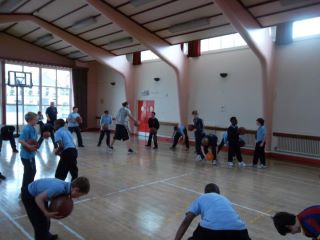 Hey guys! Another great week in Galway. First off, I’d like to thank Will for posting the awkward picture of me. I’d also love to thank Deirdre Brennan and Stephen Crothers for their clever “short” jokes in the comments they’ve made on the various photos. I get it.
But it really was a great week, as we started school, which was slightly different from college in America. Chronically late professors and twenty minute coffee breaks are not as much a part of college in America as they are in Ireland it appears. Nonetheless, classes were great and it was fun getting to know everyone in our program. Had a decent amount of reading to do for the coming week but nothing to overbearing.

As for basketball, we began official training for the Titans of the National League. Practice was good. Everybody was a little rusty but the intensity was there which is always good. We coached the Bounce camp a couple times this week and then had some of those same kids in the Titans academy on Saturday. It’s amazing how far these kids have come and to see their continued interest and love for basketball is truly incredible. We also coached at St. Patrick’s, a local school where we will be coaching when we can fit it in around class and practices. (the picture attached is from St. Pat’s).

A few NFL games have come in which I’m thrilled about. Made sure I got all my reading done so I can stay up late and watch the Jets game : ) Got another full week ahead of us with training, classes, coaching, and who knows what else. -Tim Coyne