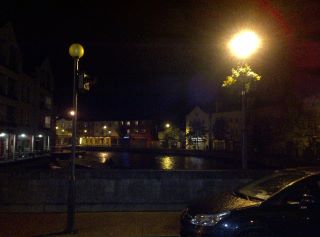 What’s up?
The last seven days have been very interesting! The second week of school was pretty much over by Tuesday afternoon. Our International Management class ended up going to Sligo on a team building field trip (see pic). We spent all of Wednesday afternoon at the Boda Borg trying to decipher a bunch of puzzles. Following the team building exercises, we headed to the pub where a few of us spent a good part of the evening playing Wii bowling and tennis.
Aside from our Sligo trip, we spent the majority of the week coaching kids from several schools as well as kids from the Titan Academy. My first stop this week was at St-Pat’s school. I ended up coaching the 10 year old kids with Titan’s Head Coach Matt Lint. After an hour of coaching, the kids seemed as if they had learned a lot and had a lot of energy during the entire session.
On Saturday morning, I headed to St-Mary’s college to coach the kids at the Titan’s Academy. I ended up being alone to coach the final session of the day where approximately 44 kids had showed up. The kids did a great job following instructions and the entire session ran very smoothly.
First game is Sunday afternoon. I’ll let you know how it went next week!
Will