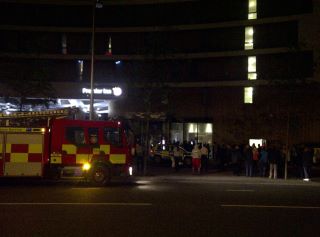 Just to follow up on last week’s post. Yes, we won our game versus Maree. It wasn’t pretty to watch, but we did get the W. There is a lot of work to do for our team to reach the level we want to get to and hopefully with hard work and the development of good habits, we’ll be able to get there by March!

This week was a little different than the other weeks, as we didn’t get the chance to coach any of the kids in Galway. We attended an ‘Ethics Seminar’ Monday night designed to promote an understanding on how to coach children. Interestingly, several coaches from various sports attended the class and some great discussions were brought up throughout the evening.

Thursday morning, Tim and I left Galway to head out to Belfast to meet with the USNI group and play in the ESPN tournament. At our arrival, we were directly taken to Dr. Brennan’s home where she cooked us an amazing home cooked meal. Spaghetti bolognaise, garlic bread and everything! Following supper, we had practice with the Uslter Elks for a few hours to prepare us for the tournament.

Head over to the Thursday night. It’s 2:30 am and we’re awaken by some kind of siren. Tim and I look at each other and decide whether this is a fire drill, a prank or a bomb scare! The latter option seemed like a possibility considering we were in Belfast. We headed down the emergency stairs, went outside and gathered around with the hundred other hotel guests. A few minutes later, the fire department arrived and informed us everything was under control. There was NO bomb in the building. Some kid had decided it would be funny to pull down the alarm at 2 in the morning!

We played in the ESPN tournament over the next few days and had a great time. Playing in 6 games over a 2 day period was rough on the body, but we survived!
Thanks to USNI for a great weekend!