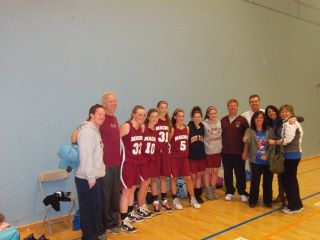 Hey guys! Tim here after another eventful week in Galway. This week was a particularly special week for me as the New York Falcons, a young girls basketball team comprised primarily of players from my old high school all came over. A few parents and coaches accompanied them. One of the coaches, Joe Michalak, was one of the guys who is pretty much responsible for me being here as he recommended me to Joe Coughlan when Joe C. was talking to him about the Victory Scholarship program. Joe M. gave him my name, I was contacted by Joe C., now I’m in Ireland and the rest is history!! However, it was great having this group here in Ireland and it was funny because a few people here were like “Wow Tim we’ve never seen you so excited in a conversation” when I was talking to the fellow New Yorkers. It was awesome having people from home to talk to and Joe M. was kind enough to bring over some things for me like Almonds and Frank’s Hot Sauce! The Falcons played extremely well, winning all 3 of their games, and the last one by 1 point, as the younger sister of one of my friends from home, calmly sank 2 free throws with 4 seconds left to clinch the victory.
Yesterday I was able to witness the new president of Ireland, Michael D. give a speech right here in Galway at Eyre Square upon returning home after winning the election. Now I don’t know much about Irish politics, but either way it was cool to witness such an important, historic event.
In other news, I got to meet Will’s dad this week which was pretty cool. I’ve been working away at assignments and we’re handing in our Quantitative Analysis tomorrow for our Research Methods course tomorrow which will be nice to cross off the list. Also, next week is the deadline for two more major projects, so this time next week I’ll be breathing a huge sigh of relief. Until then, I will be working away, training, and trying to eliminate any and all procrastination. Talk to you guys next week!
-Tim