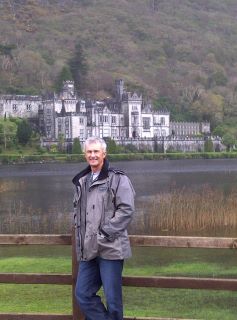 Reunion week!
This week was a reunion week for Tim and I. A NY based basketball team consisting of several top NY female players under the age of 17 were invited to play in a tournament in Galway. Tim knew the two American coaches and ended up showing them a great time around Galway. The Americans won the tournament by a single point over the Maree team and headed back home without losing a game in the tournament!
As for my reunion, well, my girlfriend Thalie arrived in Ireland on tuesday night. After not seeing each other for almost 3 months, we used this past week to reconnect. She definitely has been having a great time in Galway even she caught the Irish flu a couple days ago. Hopefully she’ll feel better over the next couple of days!
Not only did my gf show up this week, my dad dropped by after wrapping up a business trip in Amsterdam. He arrived Friday night and headed back early Sunday morning. Over the course of the weekend, we went out for lunch and supper to several irish restaurants and most importantly toured Connemara for about 6 hours.
Early saturday morning, I gave my dad a tour of the NUIG campus and Galway. After walking for about 2 hours, we decided to drive out to the country side. We ended up driving through Connemara and back up the Atlantic Coast. As you can see from the picture, he looks like he’s having a great time! And of course he did!
Other than that, we had a bunch of classes that were cancelled this week because the majority of the students in our classes were graduating. For Tim and I, graduating in October seems like a really weird trend, but the students here really don’t mind having a week off mid-way through the semester to reconnect with their old mates and drink a few pints!
Until next week!
Will