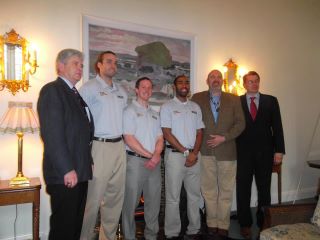 Another week in the books! Like Will said, time is absolutely flying by. I can’t believe it’s already October and I’ve been here 2 months! That’s what happens when you’re busy and more importantly, when you’re having fun.

It was a good week of classes at NUIG. Assignments are starting to be given out, as are more presentations. I’m going to be having several group meetings this week for the different presentations/projects that are beginning to develop. This past Friday, we had the USNI/NUIG launch that was held in the President’s room at the college. Apparently this room is only for very important people and special occasions. Certainly made me feel important! Several people spoke including the president of the University, Gareth Maguire, and the chairman of the Galway Titans. These gentlemen not only spoke of celebrating the launch of the partnership between USNI and NUIG, but spoke of the expectations that they have for myself and Will, as pioneers of this program in Galway. We will certainly do our best to live up to, and hopefully surpass any and all expectations that people may have for us. I know we’re up to the challenge!

Saturday we won our first National League game against Ballina. Not being able to play was driving me insane!! Will and I were like caged animals on the sideline. Both of us sitting there anxiously, tapping our feets, writhing our hands, standing up, sitting down. It’s killing us to not be able to play, but soon enough we’ll be out there.

On a personal note, it was an exceptionally great weekend as my brother returned home from his second tour in Afghanistan. The rest of my family was all there to welcome him home and I had the chance to Skype with everyone today which was great! It’s comforting to have him home and I’m excited to have him come visit me in December. Talk to you guys next week!!
-Tim