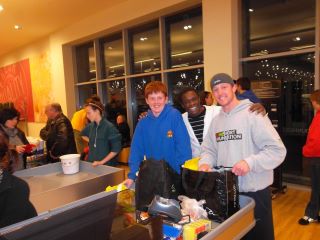 Hey Guys, Tim here checking in for the week! To say school has picked up a lot would be a tremendous understatement. We have been given pretty much all of our assignments by now and naturally, they’re all do pretty much at the same time. So now it is really going to require some effective time management to get this stuff done. But so far so good this week. I was able to get the ball rolling on several assignments. Met with one of my groups to discuss how we were going to tackle one of our projects. Overall, a good, solid week of school/homework.

We had two intense practices with the Titans this week. Guys were competing hard and things are starting to come together. However, yesterday we were missing a few players for our game against Castle Island, who won the National League last year, and we lost the game. It was a long trip down to Kerry and back for the game, but well worth it to see what other teams in the National League have.
I did a bit of coaching this week at St. Pat’s, one of the local schools, and at the Titans Academy. The numbers at the Titans Academy remain really strong and the kids are improving tremendously, which is encouraging to them as players, and me as a coach!

Also this week, the Titans organized a “Bag-Pack” at a local Dunne’s grocery store as a fundraiser for the club. It was a great fundraiser as we had National League players as well as some of our younger players all the way down through some of our youngest members in the club participating in the bag-pack. It was a two-day event and the amount of Titans that helped out was incredible!

In other news, USNI and the Titans received a bit of press this week. As many of you may know, we had the USNI/NUIG launch a couple weeks ago. This week NUIG did a press release announcing the launch, there was an article in the Galway Advertiser, as well as a publication on the main page of the Basketball Ireland Website. Check it out!
-Tim