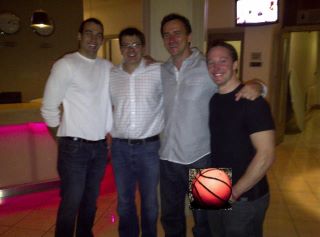 Its been a great week, catching up on some work and spending some time on the court practicing and coaching. The National League team didn’t have a game this weekend, but it gave us some time to spend with our friends and the members of the Titans organization.
Earlier during the week, I coached my first U13 game. The Titans played Moycullen. We lost by 25 pts to a very skilled and organized group. The Titans players worked hard, but now know they need to work hard this season to reach the level they want to get to.
Yesterday afternoon, the Galway Masters organized a basketball tournament at NUI’s King Fisher Complex comprised of the top ‘masters’ players from Ireland. The best 38 year olds and over in the entire country. It was impressive to see how good some of these guys are. You’d think once you reach that age, you would become a shell of your former self, but after watching some of these guys play, I realized that as you age, you lose parts of your game such as your athleticism, but gain in the IQ category.
After the tournament, which the Ulster Elks masters team won (partly in consequence to Gareth Maguire’s buzzer beater bank shot heroics in the semi-finals), the players had a supper at the Harbour hotel to celebrate the game of basketball and life itself. Above is a picture of Tim holding his favorite basketball,myself, Gareth and Kevin Craig. If you don’t know who Kevin Craig is, you should do your research on him. From what I heard, he was and still is one of the best rebounding/post guys in the country (source: Joe Coughlan). Joe did sneak in the fact that he scored on Kevin with an up and under move during their game earlier that day.
Later that night, we got the sad news that the mother of one of Gareth’s teammates had passed. Although he was away from his mother, he was surrounded by his closest group of friends in one of life’s most difficult situations. Makes you think a little bit at how short life is. I want to give my condolences to him and his family.
-Will