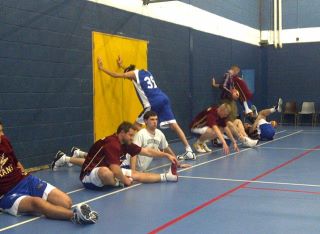 There was so much going on this week that I really don’t know where to start! No kidding! Most of our projects in school have been taken care of and I’m still sitting out the basketball games. I did ref one game and coached a couple times this week at Scoil Rois and at the Titans Academy. The kids were a little out of control but ended up calming down after doing several series of pushups and situps!

On a positive note, the Titans won their 4th game with a 50 pt blowout of Ballincolling. USNI scholar Tim Coyne made his debut and performed really well. Tim dished out 6 assists while only amassing 1 turnover in over 30 plus minutes! Our little guy tallied up 7 points and 6 rebounds to round out his stats! Great job Timmy!

11:35 am Sunday morning: Ring, Ring… Ring Ring… [I pick up the phone].
Joe Coughlan: Hey Will, are you awake?
Will: Yeh, just got up. What’s up?
Joe: Did Matt ask you to ref?
Will: Ref what? When? Where?
Joe: We need two refs at Westside Gym for the U14 boys Cup game. Can you make it?
Will: When do you need us over?
Joe: The game’s schedule for 11:30. The kids are warming up and we need a couple refs.
[I look at Tim and nod at him.]
Will: Yeh Joe, we’ll come ref.
Joe: Thanks. There’s a car parked out front waiting for you guys!

The last couple of days have been really hectic! The Titans needed to play their scheduled games prior to a certain date. Coincidently, all the games for about 6 different levels were held over a two day period! The people organizing the games over the weekend were drained after chasing after people to coach and ref the ‘scheduled’ games!

It was just another day living the dream in Galway City!

Until next time,
Will