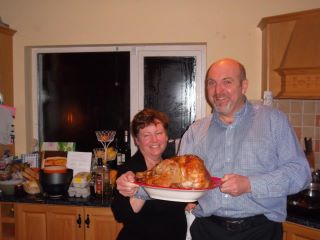 Hey guys! I’d like to wish everyone a belated Happy Thanksgiving, or Happy Thanks-for-giving, as my Uncle would say. As you can see by the picture I’ve posted, Gillian and Joe Coughlan, being the wonderful people that they are, were kind enough to have us over for Thanksgiving dinner. They (meaning Gillian) cooked a ton of food and it was everything I could have hoped for. I was truly thankful for what they did, and once again truly thankful for the experience I have here.

In basketball news, we won our game this past weekend against St. Brendan’s of Tralee. What Will was too modest to mention in his post was that he had the highlight of the game throwing down a two handed ally oop with authority in the second half! It was an incredible pass from yours truly, if I do say so myself. This weekend we have a National Cup game against UCD-Marian, which should give us a challenge. There is pressure with every Cup game, as it is one loss and you’re out!

I have been doing a bit of coaching over the last week or so as well, between Titans Academy on Saturday, St. Pat’s School during the week, Titans U-16 girls team, and then another Academy today before training. What I noticed over my first few months of coaching here is that I was getting frustrated relatively easily because perhaps I was asking some of the young players to do too much. I never want to say I expected too much of them, but some players lacked some of the basic fundamentals, or even knowledge of the game, which prevented me from helping them reach their potential. Over the last couple weeks I have taken a couple HUGE steps back to work on some of the basics of the game, and even teach the rules of the game. Like Will has done with his kids, I have started getting them all in close and teaching proper shooting technique. We have done loads of ball handling drills. I have been teaching the basic principles of defense, which not too many kids enjoy, as defense is hard work! At St. Pat’s, I took about 10-15 minutes out of the beginning of each session to go over as many rules of the game as I could before we got into games. In previous weeks, some of the boys would look at me like I was crazy if I called a travel on them and now they understand how to pivot and avoid traveling. What was encouraging during these sessions, as I was afraid they would get bored, is that in each session so many of the boys were asking a TON of questions. They really wanted to understand how to properly play the game which was great!

With the U-16 girls team, not only did we work on fundamentals, but I wanted to help work on their fitness, speed, and agility. I had them doing some more advanced drills involving single leg jumps and defensive slides. Although they weren’t the biggest fans of the drills, it was great to see how hard they worked because they are starting to see improvements which is encouraging for them as players.

Wish us luck this weekend in our game!
-Tim