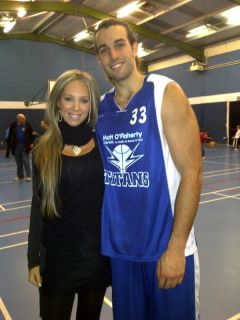 Last week of school is finally over! We have one week of studying before we have to take our final exams. Rounding up the three final exams Tim and I have are the Strategic Management, International Cross Cultural Management and the International Human Resource Management exams. The finals will be over with next Friday! I’m really looking forward to the end of the semester.
The last couple of weeks at the Titans’ Academy have been very fruitful for the kids. Nial Coughlan and I decided it was time for us to take a step back and to teach the fundamentals of shooting to the 12-14 year olds. Basics basics basics… that was the first thing we told the kids. We needed to make sure they understood that if they learned to develop the right shooting form, their shots would consistently go in and they would be able to develop as basketball players at a higher pace. After a couple of weeks of basic training, some of the kids really showed an improvement in their ability to shoot the ball. There was one young boy that caught my attention. This weekend was Ross’ second time playing basketball. Rugby was his sport of choice, but his parents wanted him to develop a liking for basketball. After explaining what the right shooting form was and what to look at when you shoot, etc etc, the kids went on to shoot. As I’m walking around correcting the kid’s shooting forms, I notice a nice arcing shot with a flawless follow through. I look more closely and it’s my man Ross. Ross had the best looking form in the entire gym. Then I realized he never had the chance to develop a bad shooting form because he’d never play basketball before. The shooting form he’ll forever remember is the one he developed this week! It was great to see these kids learn!!
Besides school and coaching, we lost our game last Friday but won the game this weekend. The previous week was pretty rough. We couldn’t buy a shot or get any loose balls. Some would say that the other team wanted it more than us. Saturday night, we made sure a repeat from the last week didn’t happen. We beat the opposing team by 30 pts and felt good with the way we played! USNI scholar Tim Coyne played a great game. I’m pretty sure he flirted with a double double amassing about 12 pts and 10 asts!
Following this weekend’s game, Thalie and I headed to Dublin for two days. We decided it would be a nice little trip to take before my final exams. We had a great time sightseeing, walking around the city and seeing some of the city’s monuments like the Guinness Factory!!! Haha.
Until next week!
Will