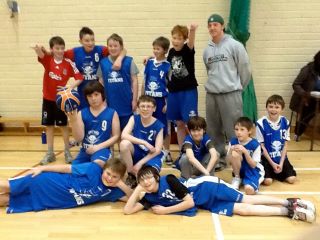 Hey everyone! So it has been a great last few weeks in Galway. We had 3 finals which I thought went relatively well and I was certainly glad that they were over! Finals ended just before our last game which was against Ballina up in Mayo. We rebounded well in that game after losing to UCD-Marian that previous week. The whole team played very well and we hit the 100 point mark which is always exciting, not to mention a monstrous 2-hand dunk that Will had in the first half.

As far as coaching goes, I am proud to announce that my Under 12 Titans boys team won their first game against Corrib! This photo was taken right after the game and you can see the sheer excitement and sense of accomplishment that the boys had after notching their first W. It is so rewarding to see them start to come together as a team and especially when they listen to what I say and really go out there and try their hardest. I always tell them that it doesn’t take talent to play hard and if they play hard they will have a chance to win every game. This was by far the best I’ve seen them play thus far, which is encouraging for them as players and myself as a coach.

Over the last few weeks I also refereed several games for Titans teams in the other age groups. There were a couple other teams who were able to get their first wins. I believe one team it was their first win ever! I enjoy reffing some of these games because while I may coach and teach some of them in the academies, refereeing gives me a different view of them as players. Furthermore, after games I will talk to several of them for a few minutes and explain what they did right or wrong or why I made certain calls. Either way, it’s really looking like all the work these kids are putting in during the Titans academies, their individual team trainings, and the weekly sessions are really starting to pay off. I think it’s great for the kids as they start to see themselves developing as players it makes them want to continue to work hard, keep practicing and grow not only as basketball players but as people as I feel these lessons translate to their other areas of life. It is important for the kids to see that if they really want something that they can work hard to make it happen.

In other news, I was fortunate enough to have some visitors over the last couple weeks. My brother and a couple of his friends came to Galway. My parents came for a couple days and everyone was able to see our game against Ballina. I absolutely loved having them there! After they all left, two of my best friends came to spend a few days with me before heading back to New York. I arrived back in New York today and it’s great to be home for a little while. I am going to hopefully be getting over to my old high school and checking out a bunch of basketball games there. So that’s it for now. I’d like to wish everyone a very Merry Christmas and Happy Holidays! Enjoy!!
-Tim