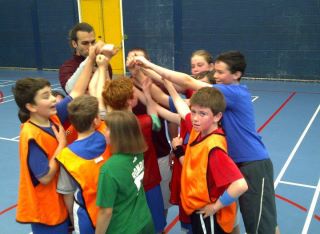 Coaching was very interesting this week. I was asked by good friend Joe Coughlan if I was able to help coach a local high school’s under 16 team for an afternoon. The kids were getting ready for their cup games and they really needed a tune up on their defense. The head coach wasn’t able to be there, but he did let me know what he wanted his boys to work on.

In the two hours I spent there, we spent about half the time doing shell drills and learning how to help the helper. We had to go a little slow at the beginning, but it eventually picked up. They guys figured out that when someone on their team was beat by the offensive player, they had to help out their teammate. By leaving their man, they trusted that their other teammates would pick up the slack and replace them by guarding their player. Once the ball was swung back out, the final defensive player would recover to the open man. In theory it seems very simple, but when the ball moves around fast and guys are attacking the rim at an explosive level, it gets a little tricky.

The academy this weekend went well too. We had about 35 kids show up, so it was difficult to manage, but the coaches did a good job making sure everyone was looked upon. We still spent half the time working on the fundamentals of shooting. You can really see a difference in the way some of these kids shoot the ball. Their form is so much better. It’s great to see. Obviously some kids have a knack at picking things up, but sometimes it gets a little difficult for the uncoordinated fellas. Although some are developing at a slower pace than others, it does seem that everyone is getting better weekly. I kept telling the kids, Practice, practice, practice, repetition repetition repetition, keep shooting, keep shooting, keep shooting with the proper form! It seems to be paying off!

Besides that, the end of the semester is here and exams start on Tuesday. Wish Tim and I luck!