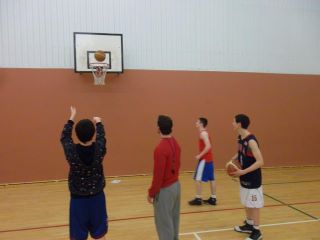 Hey everyone!
It’s been a great couple weeks back in Galway. I got to finish up working the Titans shooting camp last week. This is a photo of one of our young players working on his shot as a couple of his teammates and myself watch his form.

There was one particular instance during the shooting camp where I was first challenged, and then very moved by a particular young “lad”, who we’ll call Johnny. Johnny comes from one of the more underprivileged areas of Galway and is part of a Crime Prevention program. I had several conversations with him throughout the course of the week and he had plenty of questions for me. He was really interested in the game of basketball, where I was from, why I was in Ireland, etc. He informed me that he was still new to basketball and when I asked if he thought he would stick with it, he said he didn’t think so. I asked him why this was? And he said that he felt “anybody could just go run around and throw a ball at a hoop.” So then we continued to talk about it and I tried to point out the benefits of playing basketball, such as he can meet plenty of other kids, get into good physical shape, become really good at the sport, and have fun! By the end of our conversation he agreed with me and promised that he would stick with basketball and I even saw him trying a little bit harder after we had this chat. I was later informed by his social worker that they’ve tried bringing him to several different programs that haven’t worked out, but this basketball camp was the first one that he VOLUNTARILY wanted to keep going back to!! That’s a great step in the right direction.

This past weekend the Titans Academy was back on which was great! We had big numbers in each of the sessions that I coached and the kids were as enthusiastic as ever to be back in the gym. Some were anxious to show me what they had worked on over the break and where they can now make shots from. I also coached twice last week at St. Pat’s, one of the local schools that I help out at. It was great be working with the boys again and makes me feel really special when they run up to me in the hallways and get all excited, so much so that they sometimes get in trouble with the teachers!

The first week of classes went pretty smoothly but one thing is for certain – this semester is going to be a lot of work. International Corporate Finance alone is going to be a ton of work, let alone our other classes. However, there is one project that I’m anxious to begin working on and it is one where we will be working with students from universities in as many as 6 different countries! We are all going to have to work together on a business proposal. We are going to have to deal with real-life international business issues of working across time zones, cultures, language barriers, and settling differences. It’s going to be a lot of work but I’m sure it’s going to be a phenomenal experience.
Until next week guys!
-Tim