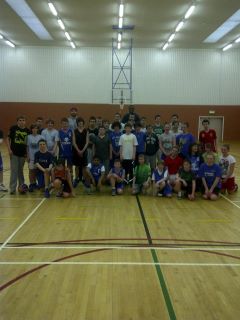 Is it me or did January just pass by in a blink of an eye? It was the fourth week back at work and I made sure I took advantage of it.

First thing, school has started to pick up as our professors have started assigning our major term projects. Most the assignments should be very enlightening. The cross cultural international business project has been the one I’ve spent the most time on. Orchestrating the rendez-vous with the team members (who by the way all live in different time zones) has been somewhat of a challenge, but besides that, the project has been going well!

Over the course of the last few weeks, I’ve been working on the fundamentals of passing with my girls from the National School. I really think they have gotten better and that their accuracy and technique has improved significantly. This week, we worked on some very basic ball handling drills. For the most part, the drills I’ve been running barely had any dribbling in them. Making sure the girls kept their eyes off the ball and in front of them when handling it was a point of emphasis.

The Titan’s Academy sessions also went well even though the number of kids at the sessions are starting to increase at an alarming pace! At one point we had close to 50 kids running around in the gym! These kids sure love their basketball (and their coaches!).

My third session this Saturday consists of the 15-17 year olds. I really enjoy coaching these kids as they tend to listen very closely to the instructions I give throughout practice. We still have a lot of work to do, but with what I’ve got planned for these guys over the next few weeks, I’ve got a feeling that things will be just fine…

The Titan’s National League team is playing in Cork Sunday afternoon. We have a 3h drive prior to the game, so that’ll be a little rough on the body. We’ve had good training sessions this week, so we’re ready to play a physical and smart game tomorrow.