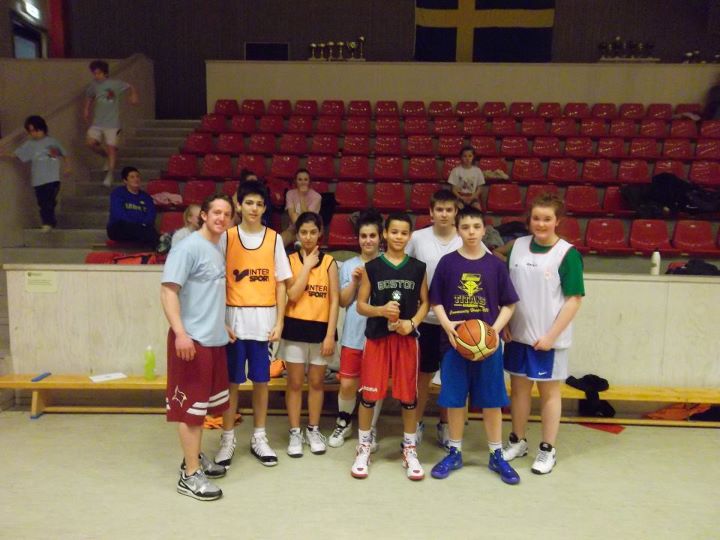 Hey everyone!
So it’s been almost 2 weeks since my last post and a whole lot has happened since then. First off, we’ve notched 2 wins for the Titans since then – traveling down to Cork to knock off the Blue Demons and defeating Portlaoise at home. Those are two solid wins that we desperately needed and now we’re off this weekend with a big game against Maree next weekend.

Last week I had a full week of school, with assignments being given out and due dates coming quickly right around the corner. I had a good week of coaching both at St. Pat’s and the Titans academy. In addition, my under12 boys team had a game which was hard fought, but unfortunately we lost. The week was rounded out by reffing an under13 boys game coached by Will, where his boys played very hard but came out on the short end.

However, on a brighter note, I had a wonderful opportunity to travel to Sweden for this past week with some of the younger Titans players, as well as parents and a couple coaches. We traveled to Goteborg, Sweden, home of Hogsbo Basketball club where their head coach is Irish basketball superstar Michael Bree. I spent the week working camp with Michael and some of his Swedish coaches, working with over 100 kids from Swedish and Irish backgrounds. This was truly an amazing experience as I was able to teach the game of basketball to kids from two different countries and get them to work together. It was incredible how these young players came together on their respective teams like they’d been playing the game together for years and not merely a few hours. It was an absolute pleasure coaching this week as all the kids had a genuine passion for the game and a burning desire to get better. I was also fortunate enough to learn a lot myself from Michael Bree, some of the other coaches, and from a lot of my players. This is simply another phenomenal chapter of the amazing opportunity that I’ve been provided with here in Ireland.

As far as challenges go from the week in Sweden, there is one particular one that actually ties into my International Management course. In some of our classes we have discussed cross cultural differences and potential boundaries for doing business across borders. One such boundary is language. Now while most of the older kids spoke perfect English, most of the younger students only spoke Swedish which made teaching them drills and running certain stations incredibly difficult. I did a lot of pointing, gesturing and demonstrating with the ball. Sometimes there would be a child who had an American or English parent and they would translate for me.

Another difference was my sense of humor. Generally speaking when I’m coaching I like to work hard and have my players work hard. However, I often make jokes to try and help the kids have fun. This past week I would do that and the Irish kids would laugh but not always the Swedish kids. I think it took them a few days to understand my sense of humor, but by the end of the week we were all laughing and having a great time. It truly was an amazing experience and I’ll never forget it.

Now that I’m back in Galway it’s back to the books and I’m heading off to the computer lab at school to finish up working on some assignments due this week, so that I can enjoy my birthday tomorrow! Talk to you guys later! Have a great week!