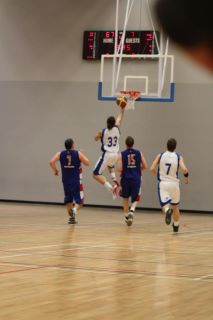 So much has been going on this week it has been really difficult to keep up! With coaching, practicing, playing games, school work, group meetings and the beginning of some pretty tough projects, managing my time has been my top priority since the last time I posted.

The weekly coaching sessions have been going great. I started showing the girls how to dribble the ball properly. The majority of them had never really played basketball before I got there, so it has been very easy for me to teach them these new skills. I really don’t have to try to break the bad habits some young players have developed over the years!

My Saturday mornings and afternoons are dedicated to the young Titans at the weekly Titan’s Academy. My 15-17 year old group this week worked on their shot once again, and I have got to say, they are SERIOUSLY getting better! I’m so proud of these kids. All the hard work they’ve been doing has really paid off. In other news, I coached my U-13 team vs Corrib. We lost the game, but considering the amount of practice time these kids have together, I was pretty impressed with their game.

My business project has picked up steam. My group members and I have ‘met’ several times (online) to discuss some of the main points of the report. We finally decided what company we would be doing our analysis for and began researching more on the potential markets our company could try to enter. At the moment, we haven’t had any trouble with any of our group members which is somewhat of a relief! From what I’ve been hearing, some of my classmates are having a nightmarish of a time with this assignment!!!

Just a quick update on our last National League game; we won our game by 6 pts or so against the Demons. It was a hard fought game which had several highlights from a few of the players on the team! And we got a win tnight vs Portlaise. Wasn’t pretty, but still got the dub!

P.S.. HOW ABOUT THE PERFORMANCE OF HARVARD GRADUATE/CURRENT KNICKS PLAYER JEREMY LIN OVER THE LAST 4 GAMES?!?!?!!? UNBELIEVABLE. A true illustration of perseverance and dedication.