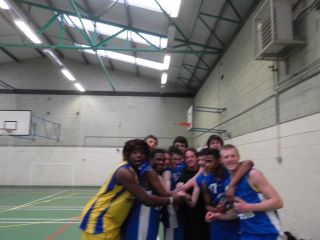 Speaking of Donegal…last week my U-18 Titans team had a little round robin tournament here in Galway between the Titans, Galway Community College, and a very talented team that traveled all the down from Donegal. First game was between the Titans and GCC. Two of my best players were late for the game and as a result I sat them for the entire first quarter. Unfortunately we lost the game by 2 and sitting those two may have had something to do with it, but they needed to understand that we have team rules and the rules apply to everyone. Nonetheless, we played that game rather poorly with a lot of turnovers and some bad shots. Donegal beat GCC by about 20 in the next game. And thirdly, we played the Donegal team, who were very talented and well-coached. This time, the Titans were ready to play. We played excellent full court man to man defense (my favorite thing to do in training) and hit some BIG shots down the stretch. We ended up winning by 2 in overtime. I used that as an example to show the boys how well they can play when they work hard and take care of the basketball.

In other basketball news, I was back at St. Pat’s this week as well as Titans Academy and the training for the Titans U-16 girls and U-18 boys. I also picked up another coaching session last week and this coming week as the coach from GCC asked me to come down and run a couple sessions to help prepare their team for the All-Irelands in two weeks time. I was happy to help and honored to be asked.

It was a good week of classes for me. We had 3 assignments due, one for international corporate finance, one for irish economic policy, and a rough draft for global business. The global business project is proving itself to be pretty difficult as there is some unwillingness to contribute from a couple group members so the workload has weighed a bit more heavily on myself and one other group member. However, that is all part of the project and part of doing business so it’s up to us to effectively deal with it and finish the task at hand.

Last night we had a HUGE win over our cross-town rival, Maree. We’re really starting to come together as a team. We’ve realized that when we put in a very strong defensive effort that we can be a very tough team to beat, as we have so many offensive weapons, but it all needs to start with defense. Maree beat us earlier this year by 6 so we were certainly up for this game. We came out hard and kept up the effort for the whole game, eventually winning by about 20 points. Myself and Will both played well and connected on an almost-ally oop (which would have been the second of the year). I will post that video following this. With the win, and provided we win next week, we will have locked up second place in the league which would mean a home quarterfinal which is always nice.

Anyway, I hope everyone has a great week. I may try and stay up for this all-star game but I don’t know if I’ll be able to. Talk to you guys later!
-Tim