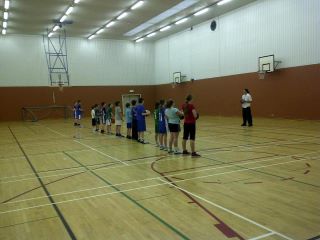 What’s happening?! Things in Galway have been very quiet this week as the mid-session of the semester has arrived. The majority of the schools in the area are off for the week, so the coaching at the National School and the Titan’s Academy were stalled temporarily.

Coach Matt did organize a short 2 day camp at the end of the week for the kids that did want to work on their basketball skills during their off week. The first session included a handful of 8-10 year olds. Matt and I decided it was time to really focus on developing their cognitive abilities and coordination through repetition and hard work. After playing a few fun games such as ‘killer bees’ and ‘cat and mouse’, the young ones went hard at work when we started showing them the proper footwork for the right handed layup!

The first thing I did was line them up in the middle of the court. Asked them to raise their right hands (which they all did… eventually!), and to step forward with their right foot, followed by their left, and to eventually lift their right knee up to give them some explosiveness. I eventually got them to sing the ‘RIGHT, LEFT, UP’ song for a few minutes, which was amusing to hear.

After catching on to the tune, we headed to the basket where we applied our newly gained knowledge. ‘Right, Left, Up’, I kept hearing from a few determined little basketball players. We went hard for another 20 minutes, until I thought the kids had learned enough. Hopefully they’ll go home this weekend and keep working hard at it!

By the way… I know I spoke about Jeremy Lin last week… But I just need to mention this again, ‘with hard work and perseverance, big dreams can be accomplished’. Even with a loss last night, he still amassed 26pts, several rebounds and assists. He really is the epitome of hard work!

Talk to you guys next week!!