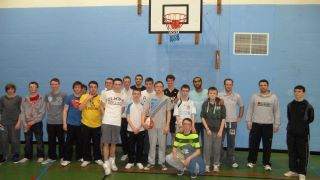 It’s March! Which means that its the most exciting time of the year for basketball. Anyone unfamiliar with March Madness, it is the time of the year when all the college basketball conferences hold their respective tournaments to then see who goes dancing in the Big Dance. The Big Dance is comprosided of the best 68 Division 1 basketball teams in the country. All these teams compete in a single elimination tournament for the ultimate college basketball achievement which is the national championship. Ironically enough, I will be playing in the All-Ireland college finals this upcoming week. So technically, I will be competing for a national championship against Dublin Business School.

Although March Madness is an American phenomenon, we had a taste of it here in Northern Ireland! The 14U Junior Elks girls team that I coach played in a thriller against Towers from Dungannon earlier this week. The double overtime game went back and forth with great play on both ends. With every bucket scored, the bench erupted and the atmosphere was electric. Some big plays were made at the free throw line and on the defensive end that allowed us to pull off the victory.

Also, the Ulster Elks senior team will be competing this upcoming week in the first round of the playoffs for the Premier League. We will host the 8th place team who has yet to be determined for a 3 game series (1 home, 1 away, 1 home). We finished the season off strong with a home victory against Letterkenny, who could actually end up as an 8 seed.

As you can see, in March everything takes a back seat to basketball… well at least in theory. There are other important things still going on including the never-ending school work and also the eHoops program. Pictured below is the group of kids I work with weekly to help better their paths in life. As much of an impact that I am trying to have on their life, they have returned the favor. In future posts, I will share my experiences that I have with these great kids.