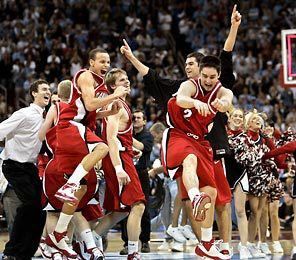 It’s that time of the year again where all the college basketball fans in the world reunite and watch the greatest basketball tournament ever! In a few short weeks, the NCAA Tournament will be up and running. Upsets will happen, a new Cinderella will go to the big dance and a new champion will be crowned!!!

Every time March comes around, it always makes me reminisce about our 2008 Elite Eight run with the Davidson Wildcats. That year, we had won the Southern Conference Championship and headed into Raleigh the following week to play Gonzaga in the 1st round of the tournament. Coach McKillop had never won a tournament game and the Wildcats hadn’t won one since the 1969 run to the Final Four. We ended up beating Gonzaga, Georgetown, and Wisconsin, but lost to Kansas by two in the Elite Eight. We had the chance to win, but couldn’t pull it off. But looking back, there are no regrets because this was one of the greatest experiences of my life. I’m just grateful that I had the chance to go through such a run with the likes of Max Paulhus, Andrew Lovedale, Jason Richards and this guy named Stephen Curry!

Next week I’ll try to incorporate the dribble prior to the layup and maybe try and get them to do a left handed layup… that’ll be a challenge, but I’m sure they’ll be up for it!

We have our last game of the season against Portlaise tonight! Next up are the playoffs!

See you next week!