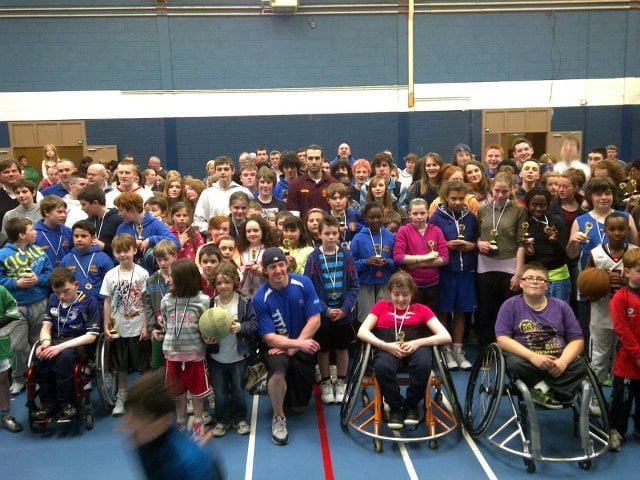 You probably already know this, but we lost last week by 2 against Ballon, 80-78. We played really well as a team, probably was one of the better games we played all year! Paulus had a game high 29pts, Freeman hit one of the biggest shots of the game in the final seconds of the 4th and Tim played great D on the starting point guard! It’s a shame the season had to end the way it did, with the Titans losing their fourth finals in a row. Hopefully next year, the guys will be able to finally break this evil curse!

Earlier this week, I supervised an intercultural scrimmage in one of the town’s gym. Prior to this, the Titan’s wheelers club (wheelchair basketball team), were practicing for their upcoming basketball game. One of Titan’s biggest supporters was there, David Kennedy, playing his heart out against some of the toughest athletes I’ve seen all year. These basketball players really illustrate what perseverance and dedication really is. No matter the reason they became confined to their wheelchairs, no matter how old they where, you could really see their determination in the way they played. It was something special to see.

The titan’s academy wrapped up this week. This weekend was the last academy of the year. It was an emotional day as this would be the last time I would coach the Titans kids all together. We spent the final session playing full court games, snatch the bacon and knockout. Following the session, we had the Titan’s award ceremony where the young titans were honored for all their hard work this season. All children under the age of 12 received a participation medal, and MVP’s and Best Titan award were awarded to two players in every age group. Above is a photo of the entire Titan’s organization hanging out after the ceremony!

Next weekend are the university varsities. The NUIG team looks very good. The team is comprised of a few Maree, Moycullen and Titans players. I think we have a very good chance of winning the entire thing next week. We have a practice Wednesday night and we’re leaving for Limerick Friday morning. Wish us luck. Hopefully NUIG meets Jordanstown in the finals for an all- Victory Scholar show down!

See you all next week!