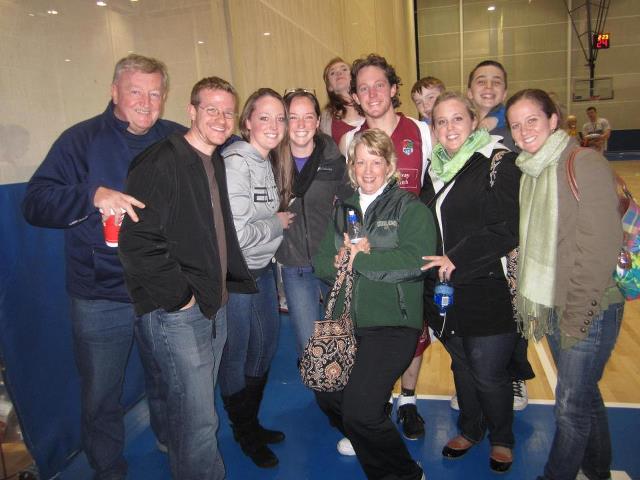 As the other guys have already stated, Darryl and the Ulster Elks took home the championship last weekend at Varsities in Limerick. Naturally, I really hoped that we would win with NUIG, but if it wasn’t going to be us, it certainly should be a fellow Victory Scholar and our counterparts in the North. So I’d like to wish them a HUGE congratulations as they certainly deserve it.

I enjoyed playing with the rest of guys on the NUIG team even though many of them were our rivals during the National League season. We all got along very well and had an awful lot of fun playing together. I was fortunate enough to have my family over for the weekend as well. My parents, sisters, and some cousins were all here for the holiday weekend. They really enjoyed the opportunity to see me play because it’s been several years since my playing days at St. John Fisher College.

All that being said, you hate for the end of basketball season to be here. I cannot believe how fast this year has been flying by. However, as a coach, I am excited about the off-season. This week I will begin training the Titans U-16 team from this past year, who for the next 2 years will be competing at the U-18 level. They are a talented group of young basketball players who are anxious to work hard and get better. I only got to coach this specific group of boys sparingly throughout the year so I’m definitely looking forward to the next 5 weeks or so of training that we’ll be doing.

And as for this next week is concerned, when I’m not training the boys I will be studying, studying, studying, and doing a bit more studying. We have 4 finals next week over the course of 7 days and there is still a lot of material for me to go over. So it’s back to the books for me! Talk to you guys soon!
-Tim