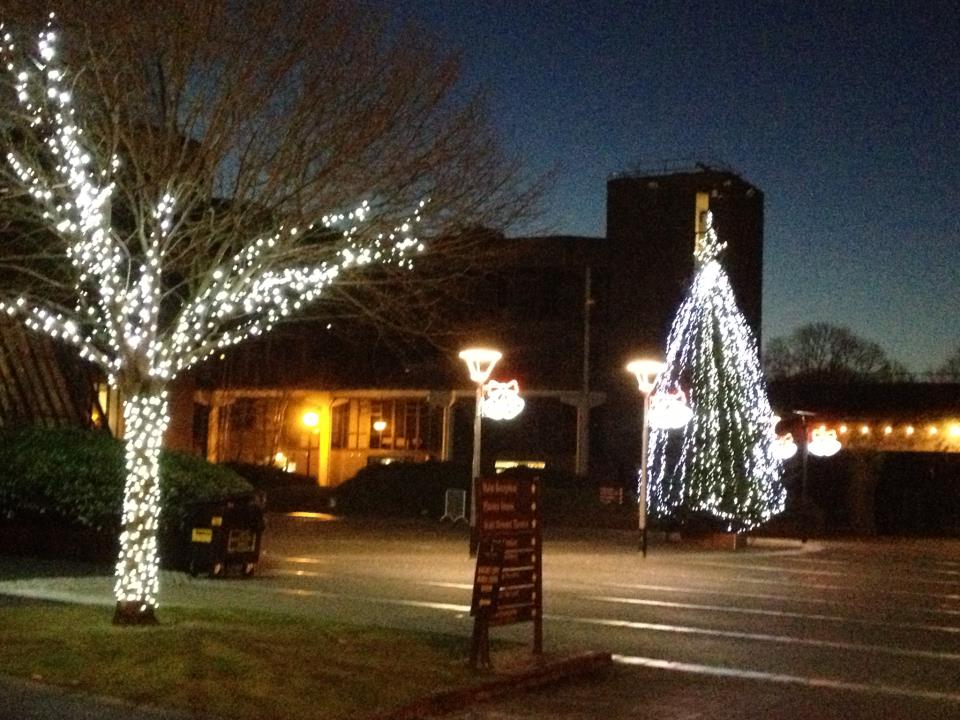 What an unforgettable semester it’s been. In five days, I’ll be boarding a bus at 3am to catch a 7am flight home from Shannon Airport for a 3-week break. Pretending to disregard my aversion to early morning wake-ups, I’m looking forward to enjoying a few weeks in farm country, Virginia. My dad has already promised a large breakfast of eggs and bacon for my first morning back. However, given past years, I still expect my parents to underestimate the amount of food necessary to keep me alive over a 3-week period. My apologies, in advance, for the grocery bill.

The University of Limerick recently put up a Christmas tree on campus (see picture), providing a daily reminder of the light at the end of this long tunnel that is final exams period. I can hardly believe the semester has gone by this quickly, and yet, I oddly feel as though I’ve been here for more than a year. Each day of this experience reminds me how truly grateful I am to the Sport Changes Life foundation for making this year possible.

Taking a break from studying for my two remaining final exams, I can’t help but reflect on my (does “busy” even describe it?) four months here. After arriving with a nagging knee injury, my impatience led to a sequence of three consecutive pulled hamstrings, delaying any consistent time on the field until quite recently.

That being said, last night, I played all 90 minutes in a final match before returning home for the holidays…it ended in a 1-1 draw. So my fitness is returning, the old injuries continue to progress, and believe it or not, having a fresh start has cleared my head, and reinvigorated my love for the game, and my approach…I’d like to think I’ve become more patient when it comes to future injuries – yeah, right. I’ll even enjoy an opportunity to continue playing over the holidays…In January, I’ll be heading to Philadelphia to try out for the U.S. team for the 2013 Summer Maccabiah games (shout out to the Jewish side of my family for making me eligible). At this point, however, I’ve acknowledged a newfound satisfaction simply in lacing up the cleats again day after day …anything beyond that is merely an added bonus.

Thus far, I’ve submitted two (out of six) graduate school applications for next year, for sport and performance psychology programs. No doubt, I’m looking forward to the continuation of that tedious process over the next few weeks.

Last week, Sarah and I accompanied John Keyes (a coach from Arsenal FC’s community programs) to Corpus Christi NS, a primary school in the disadvantaged community of Moyross, on the outskirts of Limerick. We had an incredible time with the kids, playing some 3v3 soccer in the gym (props to Sarah for displaying some impressive skills and nearly scoring with a shot off the crossbar), and joining them in the classroom for the final session of their semester long program before Christmas break. While it was, for the most part, a wrap-up of the previous weeks, it was easy to note how enthusiastic and grateful the kids were for the work John had been doing. One of the younger boys even acknowledged the importance of the program, noting that he became aware, as the weeks went on, that soccer came “after finishing our school work.” It’s quickly becoming obvious that John is having a massive impact in these areas, in the way he interacts the residents, and the extent to which they respect him. I hope the coming months provide further opportunities to learn from him and help out in any means possible.

I was fortunate (careful word choice there), during practice the other day…I hit the shot of my life…during a small sided game, I pushed the ball forward from about 30-35 yards out, and unleashed what might be best described as a heat-seeking missile on a string to the top corner. I will be the first to admit that I will NEVER strike a ball like it again (and those who know me, know that I don’t score many goals, period…let alone Steven Gerrardesque goals:https://www.youtube.com/watch?v=Rv6vpGkhP0I). But, as most soccer players can agree, it was nice to enjoy it while it lasted.

Lastly, on the 5-6 year old coaching front, the last practice of the year before Christmas yielded a grand total of two players showing up yesterday (out of what, most times, is ten-fifteen). Needless to say, it wasn’t the most productive hour and a half. Even the one 7-year old who was sent to my field (to give me an additional player) chose to sit on the sideline for half the practice (don’t ask me why, I have no idea). The good news, however, is that “Patrick” (the 5 year old who has a habit of running other players over, in his attempts to get the ball) is showing marked behavioral improvement from the earlier sessions. It’s becoming quickly obvious that he responds positively to extra individual attention. He even extended a hand to help the other teammate up yesterday (after he had, of course, run the kid over in his attempt to get the ball). Small victories though, small victories.

All my love to those at home…can’t wait to see some of you.