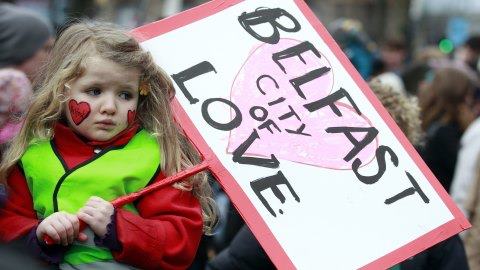 “Be the change that you wish to see in the world.” –Gandhi

Change is difficult for anyone and everyone that has had to deal with it in their life. Change is something that we sometimes bring upon ourselves, but also sometimes is completely out of our control. At yesterdays’ E-Hoops session we tackled an issue of change that has recently been in the news in Belfast and across the world. The issue of the Union Jack flag being taken down from the Belfast City Hall has created quite a stir in Belfast and its surrounding towns. During part of the E-Hoops session, the E-Hoopers and staff came up with two separate lists (What is being done about it? and What would you do differently?) from three different points of views of the parties involved (Police, Politicians, and Protestors). The E-Hoopers and staff were all very honest and interactive in answering all the questions, as well as telling life stories of how change has impacted their lives in the U.S. as well as Northern Ireland. It was very interesting to see these views of the E-Hoopers in these two lists and it made me realize how impactful change really is in our lives.
The next question asked to the E-Hoopers and the staff was how should we as individuals solve this problem? I immediately thought of the quote, “Be the change that you wish to see in the world.” –Gandhi. This was the main principle that has stuck with me since the session and I hope that the E-Hoopers have taken this principle of change with them as well. Thank You for reading!!!