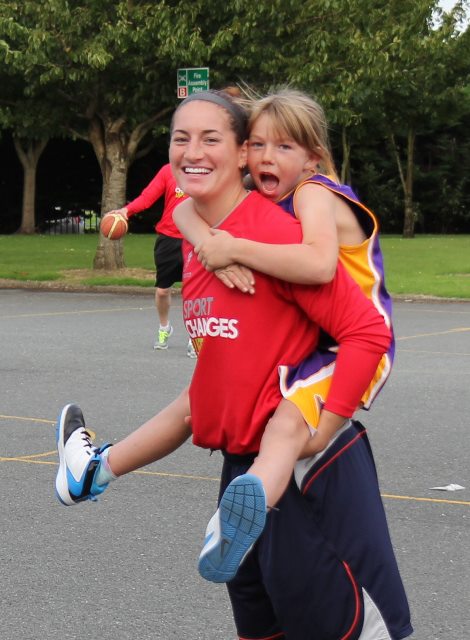 Making every minute count of my experiences in Ireland so far is not an exaggeration by any means. Aside from literally having the the busiest and most fulfilling 2 weeks of my life, I realized that I really do have to make every minute here count. We just said goodbye to another amazing group of young basketball players that we had in camp in Clonmel for only 3 days, but the way our goodbyes went you would have thought we’ve known these kids for years.  I didn’t realize how impactful we truly were until today when even some of the quietest kids I was coaching came up to give me a hug before I left.  There were even some tears from a young camper because she didn’t want us to leave. But I think it really hit me that we are role models to these children. When they asked for our autographs as we were getting on the bus I was overcome with pride to think I had such an effect on a young person in such a short space of time.

When we were asked to give advice to the large group of campers we had in Dublin earlier in the week, I stood in front of them and first explained the definition of the term “walk-on player” and let them know that absolutely anything is possible when you work hard despite having a lot of odds against you.  The thought of playing at a division 1 college level was not even a consideration for me at all when I was in high school.  The thought of playing after college in another country was another farfetched dream of mine that no one thought was possible.   But I am a firm believer that if you continue to work hard for what you want and believe in yourself, opportunities will present themselves eventually becuase of your hardwork.

It’s crazy to think that taking a chance 5 years ago along with hard work and dedication would land me here in Ireland.  In just this past week I was able to attend the national semi-final Hurling match in a stadium with over 60,000 people, get a personal tour of the Irish parliament building, drink a pint in both the largest and smallest pubs in Ireland, and present a trophy to the winning jockey of one of the fastest horses in the world at the Tipperary Race Track.  We have certainly made every minute count in these past two weeks and I wouldn’t have it any other way. Until next time…Michele