A Lesson In Irish: Things Are Not Always What They Seem 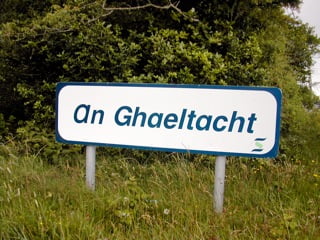 Delving back into my childhood memories, I recall studying subjects in elementary school such as math, social studies, reading, and writing. In those days, I had enough trouble trying to figure out the rules of one language that I can’t imagine studying two at a time. However, that is exactly what young Irish kids do. In addition to studying English, they study Gaelic (affectionately called, Irish).

One of the schools I have been working in is an exclusively Gaelic speaking school, meaning all interaction between students and teachers is in Gaelic. Thankfully, they are allowed to speak English to me.

As if speaking Gaelic isn’t difficult enough, between some of my own teammates and girls we are coaching, I have gotten an intense lesson on the strangeness of traditional Irish name spelling. If there is one thing I have learned, Irish names are never pronounced the way they appear. For example:

4. Last but not least…you will never guess what this one is: Caoimhe= Quee-vah

This crazy spelling hasn’t been the only instance of things not being what they appear. When Katie and I first began coaching our U-17 girls team two weeks ago, they were one of the quietest groups I had ever seen on the court. We had to beg them to talk! Fast-forward two weeks of training and two friendlies later, most all of our girls decided to join in on the U-16s training this morning that Katie and I ran. It was a mix of girls who had never trained with us before and veterans of our sessions. Much to my surprise and delight, our girls from the U-17 team were not only talking on the court, but DEMANDING that the others talked as well. If you had told me two weeks earlier that those girls would do anything like that I would have asked if you were crazy.

For me, as a coach, it was a very proud moment. Seeing how far those girls had come in terms of their confidence on the court in just two weeks was amazing. It was a nice little reminder that like Irish spelling, things may not always be what they seem.