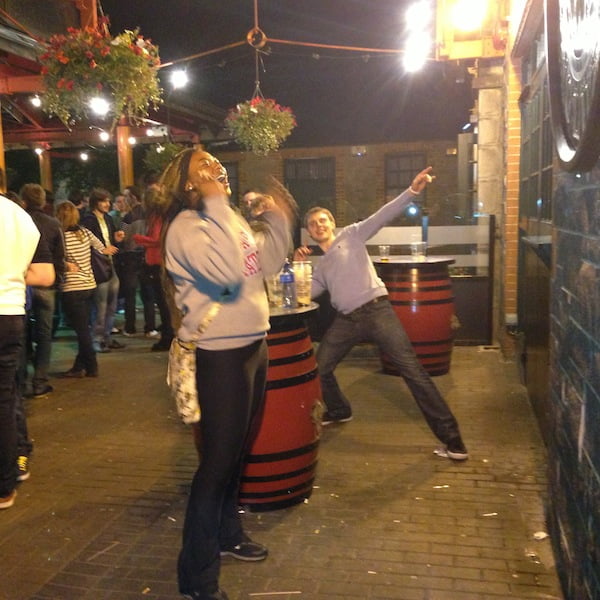 So I have good news and then I have weird news. The good news is that I’m still over the moon from Katie’s surprise visit with her parents. I admire their love for one another, her dad’s humor and intellect, and her mother’s caring and kind-hearted ways. They recently celebrated their 24-year marriage anniversary, now that’s love! Y’all are a beautiful family and thanks again for the lunch. I also found out that I’ll be able to play on the superleague team so things worked out.

Now it’s time for the weird news. At one of the typical campus parties me and Diana ran into a guy named David, from Scotland. He decided to start telling people that I was “Marion Jones, the disgraced Olypmic sprinter from America,” and that “Diana was named after the Michael Jackson song Dirty Diana.” He then challenged me to an extremely short sprint and he won, of course. His winning pose was the exact same as Usain Bolt and it was absolutely insane.  I’m sure he won’t be the last of the many characters I will meet. He definitely cracked the top 10 list though.

On a lighter note, classes are going well and I joined the International Society. I’m all about campus involvement, but I can’t get too involved with lengthy reading assignments, group projects, and a 15,000+ research paper that will creep up on me so fast even though it’s due next September. Oh yea, I’m still coaching and I have a feeling more tasks will be added to the list soon. Time to show off my time management skills and as my mother says “adjust accordingly because I am her child,” completely disregarding that I’m my father’s child too..haha. Anyways, speaking of time, I can’t wait until I’m reunited with the other Victory Scholars. See y’all soon!