Mission 7: Never Give In 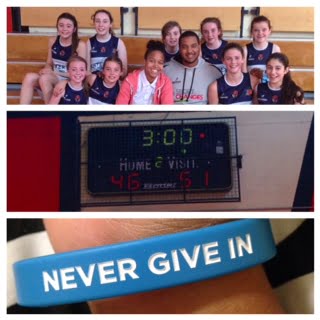 This week’s mission was suppose to just be about orientation which happened to be a three day, two night stay at Clearsky Adventure. While at Clearsky Adventure, I had the opportunity to connect and meet my classmates that are studying MSc Management through competitive team challenges. Some of the challenges included the blindfolding climbing tower, target archery, rocket launch, and other team building challenges. I had  an awesome time! The title of mission comes from something that I wear around my wrist everyday supporting the Prostate Cancer Foundation, from which my late grandfather had. On the band it says, “NEVER GIVE IN”, and this weekend it is exactly what the Jr. Elks 14 & under team did.

Bryan Wilson and I  coached our first friendly game this weekend, and going into the game it looked like we were playing girls that were much older then us because of their size, but they really were the same age. The other team was up by 20 at half-time. At our half-time discussion, we knew that adjustments were needed. With these adjustments, we felt our team could get back in the game and possibly come away with a victory. There was no doubt at all about this and you could tell by the girls faces. We knew that we had to get within 10 by the 3rd quarter and so we clawed our way back. One 24 second cloack at a time we worked hard on offense anddefense. By the time we came up for air, it was a rap as they say. We just couldn’t stop making shots, getting rebounds, and stealing the ball. Because we never gave in… We came from behind to get our #Victory in OT 51-46. To see how happy the girls were after this Win was amazing & priceless. As their coach, I was so happy and proud of them. It was one of the best highlights of me being here since August!