An Even Smaller World 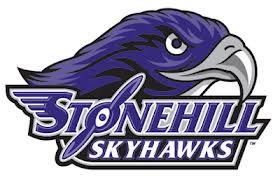 What are the chances? I thought it was ironic that I had met people in Belfast that knew someone from home or even places such as my school but to my surprise there was a lot more to come. A few days ago I was minding my own business listening to music while lifting at the gym at the University of Ulster campus. I was wearing a Stonehill Basketball T-shirt, and this girl on the treadmill was just staring at me. My initial thought was “have I forgotten to wash my face or have I spilt my breakfast on my t-shirt without noticing?” and I was too nervous to look to see if anyone else was looking at me so I continued working out. Then I noticed her lips to move so I took off my headphones and I asked politely if she was speaking to me and she nodded (while running on the treadmill) and said “Did you go to Stonehill?” and I answered ‘Yes, I did, do you know it?’ She then said laughing, that she had graduated from Stonehill in 2010, which was when I was a freshman there. I was caught off guard at first but as we started to chat, during the entire conversation, I couldn’t believe I actually went to school with this girl for a year and then I end up meeting her in a gym at the University of Ulster Belfast. This whole encounter has made me think about how I interacted with people before I came to Ireland. I always talked to people but I never realized the power of just starting up a conversation with a stranger who you might end up have more in common with than what you think. It also made me think if I just didn’t wear that T-shirt that day then that conversation also would have never happened and we both would have never known that we actually went to college together. It’s only been a couple months and I’ve had so many ironic occurrences, but I am noticing I am already starting to think differently when it comes to seeing that the world is a much smaller place than we think. So for the rest of the year I don’t think I’ll be as surprised be who I bump into.