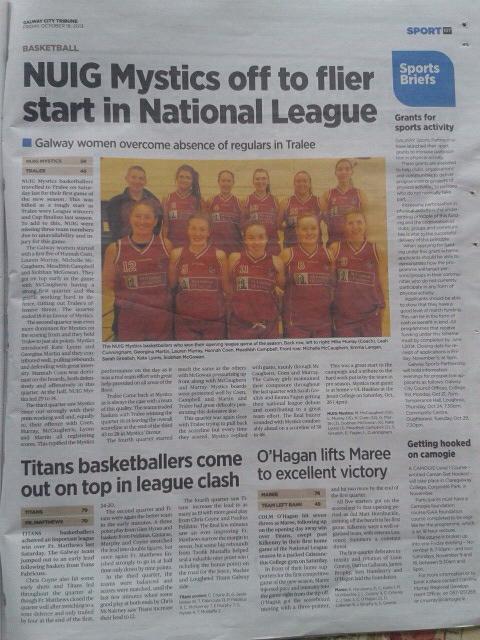 I had a bit of a rough week last week but I’ve since recovered and learned that there is always someone looking out for me. I forgot to mention that last Saturday as my team the NUI Mystics secured our first victory of the 2013 season, I suffered a hard hit to the head during the third quarter which temporarily stopped the game, but I was fine to reenter the game later. As I progressed through the week each day I became sicker and the pressure in my head continued to increase. I eventually realized I can’t fight this myself and went to the doctor whose diagnosis was a severe sinus infection, and to my avail not a severe concussion. I’ve been on medication and feel I have just about fully recovered, which is great considering my first home game is this Saturday!

During my times of sickness this week I discovered as scary as it is to be ill in another country and to not even know what the typical headache medication to purchase is, that the outreach and support I received from everyone was so comforting.   My classmates were concerned and were the ones to direct me to the university doctor and noticed that I didn’t look well either.  My one classmate who’s such a character yelled, “Shelly Shell I heard you’re not well!!” when he first saw me.   Even my professor expressed concerned as we were walking out of the building together he asked how I was doing and I said I had a bit of a headache and explained the situation. He was surprisingly very sympathetic and apologized saying that his two hour lecture on Irish Economic Policy probably didn’t help my head.  My Titan’s basketball club family was very concerned and supportive during this time offering me rides to the doctors and asking if I needed anything. My NUIG Mystics teammates and players have been checking up on me as well so it is such a comfort to have everyone helping.  And even my roommate and fellow Victory Scholar Chris Coyne, showed his domestic side as he prepared a delicious salmon dinner for me on Friday night.

Word travelled fast about my illness and the amount of people that helped me and were looking out for me was truly great.  I didn’t realize how many people are always watching whether you are sick or not.  There was a great news article written about my team’s first win with a large picture in the paper, and it surprised me how much people take notice to these things here in Galway.  As I entered the gym on Monday night, the father of one of my players was outside and said, “Good win in Tralee, I heard someone had 19 points.”  Even last night hanging out with my guy friends that belong to the same gym as I do, mentioned “Some of the guys saw you benching 22kg dumbbells, is that true?” I was really thrown off because lifting in the scholarship athlete weight room there are rarely that many people in there at one time and I didn’t recognize any familiar faces. These are just examples of little comments that took me so off guard because I didn’t expect people to take notice to these things.  (And to be honest I don’t even know what 22kg converted into pounds is I just gave it a shot 😉 ) After having time to reflect as I was on bed rest I realized that whether you know it or not there will always be people watching out for you, I have always thought about being on my own here but there is something about here that really makes you feel your at home away from home if that makes since. I just hope that I can return the favour to everyone that has helped me so much and looked out for me along the way <3