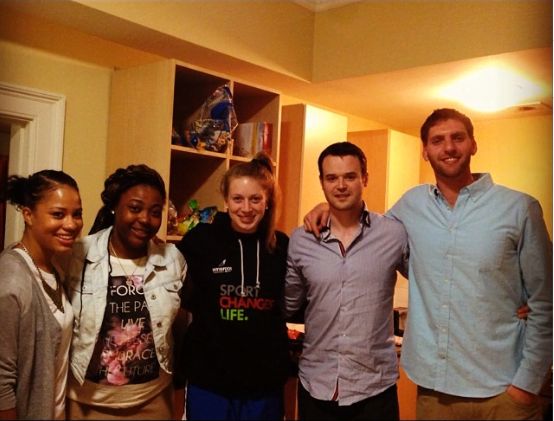 It was a busy weekend in Dublin for me. After coaching Elks youth teams Friday night, I hitched a ride with former Victory scholar and Irish superleague legggeeend Paul Cummins down to Dublin. My main reason for heading down South was to take the LSAT, the law school entrance exam, on Saturday afternoon. I’ve been studying for a while so hopefully I did pretty well… tough to say though, I’ll know in three weeks so I will keep you posted.

After the test (4.5 hours!) I headed back to Trinity College to meet up with fellow scholars Katie, Shelby, Marian, and Diana. We spent a night out in Dublin along with Paul and a couple of his buddies. It was a good end to a long day.

I was planning on heading back up to Belfast Sunday morning/afternoon, but the time started to fly by and I was still in Dublin. It was around 4 o’clock so I decided to check out last minute tickets to the Jay-Z concert going on that night. Ended up finding one right near where Diana and Marian had seats, so pulled the trigger on ’em and went to the show. I haven’t been to many concerts in my life, but this one was pretty sweet. Plus I squeezed in where Diana and Marian were, and ended up sitting (standing) with them the whole time.

Took the bus home Monday morning and passssed out. Tiring weekend but very fun and definitely glad I ended up seeing the show. Good times