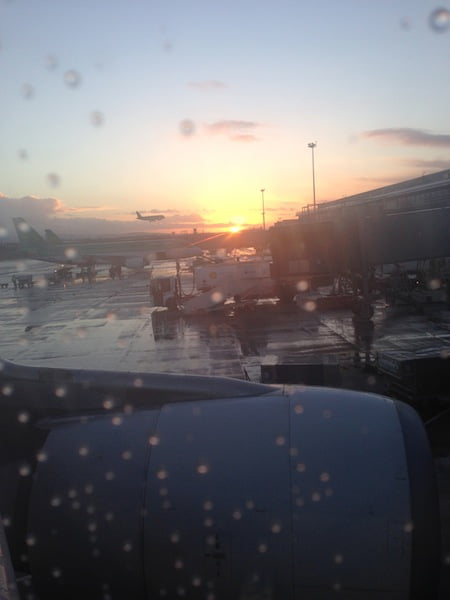 I write this blog as I’m on my way home to Philadelphia from New York.  Why am I coming from New York and didn’t land in Philly like I was supposed to? Well funny story…I was originally supposed to take the 615am bus from Galway to the Dublin airport to get an 11am direct flight home.  It was my teammate’s 21st birthday party that night so my original plan was to stay up all night. Easier said than done.  I came home from the birthday celebrations that night I was all packed and ready, but just couldn’t stay up for four more hours, so I decided to lay down, not worried considering I had 5 different alarms set. Well the interesting thing about all of my alarms, they actually weren’t set to “ON.” I realized this when I randomly woke up and checked my phone and it was 8:30am.  In a panic, I grabbed my luggage and ran as fast as I could to the bus station. I hopped on the next bus to airport and told the bus driver I had an 11am flight, he laughed and said were not even going to make it into Dublin until noon.

The entire ride to the airport I just kept praying that there would be another flight and that this process would go smoothly. I kept thinking of my family and how they had planned to have a big party when I arrived later that afternoon. Having never had to change a flight or miss a flight before I didn’t know how this was going to go.  I arrived at the airport and my first thought was, “Yes, no lines!” and then I realized there were no lines, because there were NO people working at any of the airline desks. I found a random worker and I asked where I can talk to someone from US Airways.  They informed me that their ticket offices close at noon and only operate from 8am to 12pm. I was baffled that they are only open for four hours a day. I told them that I desperately need to find a flight to Philadelphia. The woman said I can call the airline’s customer service number. Well, I had ironically just dropped my Irish cell phone and the battery came out which causes the phone to reset and a special pin number is needed to unlock and use the phone again. The pin number is written on the box that the phone came in, which conveniently is on my desk in my room in Galway. So now I have no means to call the airline. I frantically went up to the woman that told me about the number again and asked how I can call them, and she said your going to have to use the pay phone.

Having spent all of my euros on the bus to the airport, I had to then exchange my US dollars for Euros so that I could use the pay phone.  I put my money in the pay phone and when finally getting through the automated messages I was then disconnected. I tried again using up the rest of the credit and was able to speak to a live person but they apparently couldn’t hear me and just kept repeating “hello.”  At that point I hung up the phone and nearly had a break down. I felt stranded and helpless.

It was at that moment that a middle aged Irish man saw me and my look of defeat and he asked me if I needed to use a phone. I said, “Yes that would be so great, thank you!”  After having issues dialing the customer service number which he was nice enough to help me out with the area codes, I got connected then was put on hold.  While on hold I thanked him again and explained my situation about my missed flight.  I kept getting put back and forth on hold because the airline claimed that I had checked in and was on the flight.  I asked if I was holding the man up from his flight and he actually was just in the airport because he had left is iPad on a plane from his flight yesterday, so he said he was in no rush.

The man who’s phone I was using said the only air line selling tickets now is Aer Lingus, and that after looking at the departure schedules, there is only one flight to America for the rest of the day and it goes to JFK airport in New York. Seeing as I was on hold for what felt like an eternity, I mentioned to the man that I might just go to New York, because I could easily take a train or bus to Philly and it would only take about 2 hours.  Still on hold the man says let me go check to see if there are any seats available on that New York flight then.  He comes back and says, there are still seats available! I hang up the phone and I am relieved but I said, “But how much would a ticket cost?”  And the man says, “Don’t worry about it, I’m a gold card member and I have so many points on my card because I travel all the time.”  I told him that he has already helped me out so much that I couldn’t accept that, but I thanked him for the offer.

He insisted that we go to the Aer Lingus ticket office to see the status of the flight to New York anyway.  The woman behind the desk said that there was a seat available for me on the flight to New York at 3:30pm, and I said great and how much would that flight cost?  She said that will be 650 euro….my jaw dropped.  I knew there was no way that I could afford that, and that as much as I wanted to go home, this just wasn’t going to work.  As my mind raced with the different possible solutions I had left, before I could blink the man puts his credit card on the counter and says “I got it.”  I told him I really can’t accept that and that is so generous to even offer. He says, “please don’t worry I’m a gold card member I have so many points, it’s fine.” I stood there speechless as the woman prints out my boarding pass and receipt. How could this stranger be so kind?  I asked him how I could ever repay him for this and told him how much this really means to me. He said, “When you make it big and become rich and famous, just remember this and return the favor.” I told him I absolutely will never forget this.  I then asked if I could at least give him a hug, which he accepted and as he walked away he wished me a ‘Happy Christmas.’

To be honest I’m still in shock to have encountered such a good samaritan today. I feel bad I never even got his name, but all I know is his surname is Halpin. I just want to thank Mr. Halpin, for saving the day and making me the luckiest girl in the world.  I will  do as I’m told and will one day return the favor and maybe I’ll help a desperate kid trying to get home for the holidays. I can’t express how grateful I am to be on the way home right now and to more importantly be the recipient of such a wonderful random act of kindness. I want to wish everyone very Happy Holidays and a Happy New Year, especially to my AIRPORT ANGEL! #Blessed # PayItForward