Great end to a tough week! 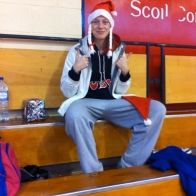 Well, exams are officially over and I survived. While I won’t get my results back for a few weeks, it is a relief to have all 6 of them done and out of the way. With the exception of a couple of projects, completing exams means a little bit of a much needed academic break.

Saturday, Katie and I started off the day with an exciting coaching win. Our KUBS under 17 girls won their quarterfinal cup game against Meteors. I was so very proud of them. They played very hard and never stopped fighting. It was great to get the win, especially after losing to the same team at the last second early on in the season. On to the semis!

That night, my Liffey Celtics team faced the UL Huskies and fellow scholar, Marian. It had been deemed a “David and Goliath” match up, with UL being the defending league champions and us still in search of our first win. With nothing to lose, we went into the game loose and ready to play, almost pulling off the upset. Even though we have yet to get that elusive first win, I can feel it coming soon! So proud of the team and never giving up, even when our backs were against the wall. It was great to see us fight back.

Now it’s time for me to finish up my remaining projects and get my Christmas shopping done. Only a little over a week before Christmas!