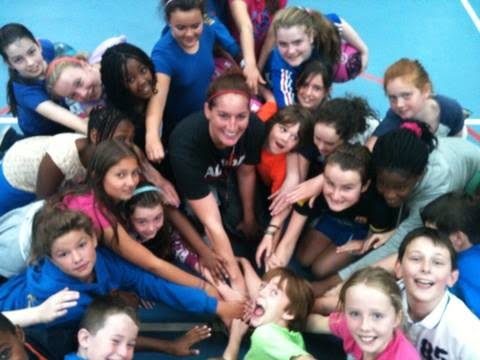 This past Saturday was the last Basketball Academy session before the new year. I coach the age groups from under 7, under 9, and under 11 year old boys and girls in three different sessions throughout the day. The last day was really meaningful to me because I was able to see progress and growth in comparison from the first session of the year.

When I began coaching these kids at first I was a little intimidated not only because I felt we had a lot of work to do, but also because trying to control energetic six year olds at 9:30 on a Saturday morning is not exactly the easiest task. However to my surprise this last saturday I had the undivided attention of all of my kids for the whole day, which was a #victory in itself. I can relate to the hyperactive and short attention spans of the kids I coach, as I myself struggled with the same problems at that age. So when I can have all twenty kids listening and paying attention to instruction, I feel pretty accomplished.

The first session I saw huge progress when I was going over form shooting with the six and seven year olds.  Without even giving description about the shooting technique yet, a young girl Ellen had remembered what we taught at last week’s session and showed where her hand placement should be with her fingers lined up with the air valve of the basketball. It was awesome to not only see her retain what I had taught her from last week but then for her to vocalize it to the group was great because she showed confidence.  When I congratulated her on using the correct form, it caused a chain reaction as five other kids in line raised their hands to show me they too had remembered to put their hands in correct spot as well. “Look Coach I had my hands here too!!” – I heard about ten times after Ellen’s comment. It was a great thing to see and to the kid’s relief they were actually making the majority of their shots in the drill which is huge progress from the first day I met with them.

Although this may seem like not a big deal for most people, these children knew nothing about the sport of basketball and for six and seven year olds to recognize and learn a specific detail of a crucial technique is very important.  Even though shooting is only a fraction of the sport, the fact that they are showing progress means we are creating a foundation for them to learn more.  Luckily since were teaching them so young they have plenty of time to develop and perfect more fundamental skills. I’m very pleased with the progress made in just four months and hope to continue the great work with my kids at the Academy after the holidays!