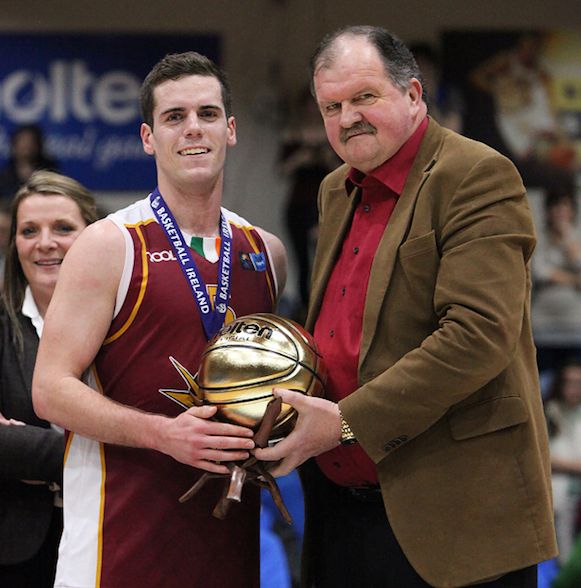 It wasn’t pretty. It wasn’t us. It wasn’t Titans basketball. But we fought. And we scrapped. And we never gave up. And now I am proud to say the Titans are the Division 1 National Cup Champions.

We were down by as many as 12 points at one point in the fourth quarter. You could see it on the faces of some fans and this picture of our coach Paul Freeman could sum up some of the doubt. I knew we could turn it on and we eventually did, but Team Left Bank Kilkenny, led by former Davidson College point guard Puff Summers would not go down without a fight. With one minute to go I hit my fourth three pointer of the 4th quarter to give us our first lead since 9-8 and the Titans supporters blew the roof off the National Arena. However, Puff had ice in his veins and came right back down and drilled a 3 pointer to flip the score back.

Now flash to Marine Park, Brooklyn where the whole family was watching the game on the new 62 inch television. Mom had the tripod set up recording the game, ya know because there would never be a copy of the national final game. She was also taking pictures of the screen, ya know because there would be no photographer at the national final game. (Just kidding Mom, I love the passion!) My nieces Blair (6) and Shannon (4) were yelling at my Dad to turn off the “stupid” game and put on Despicable Me 2. Janine (sister) and Chrysta (sister in-law) were making mimosas, cheering uncontrollably. Eddie (brother) trying to keep my goddaughter Alexandra (1.5) calm. With 17 seconds to go, Titans with a one point lead, my leg gets tangled with Puffs and I pick up my fifth foul. At that moment the game feed blacked out. While the family at home was going crazy not knowing what happened, Kilkenny sunk both free throws.

We call a timeout and draw up a play to get the ball to our dominant big man Thomas Mitkus. He scored and Kilkenny came down, got us to switch a guard on their big man who came up short on a hook shot. With a mad scramble for the rebound, Emmet Murphy squeezed the life out of the ball, making sure no one could get it. Emmet has been to four All Ireland Finals throughout his years (losing them all) and said they were going to have to cut off his arms to get that ball. We knocked down two free throws with 3 seconds to go and Puff came down, pulled up for three and it rimmed in and out.

Now flash back to Brooklyn and the live feed comes back on, with Kilkenny being awarded their medals. The room that was once hectic instantly became deflated…Until the announcer say’s “and now for the gold medal winners, the Galway Titans.” I ended up being named MVP with 15 points, 10 rebounds, 5 assists, and 5 steals. It wasn’t pretty. It wasn’t us. But the fight we showed and the outpour of support from all who made the trip east to Dublin, now that was Titans basketball.