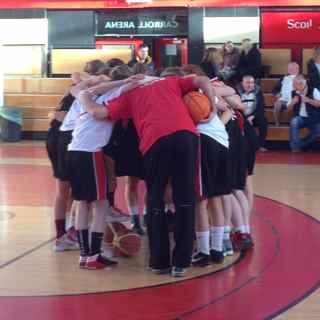 Our Saturday was CRAZY! It started bright and early with a Dart ride to Kilbarrak. Rocking the Sport Changes Life t-shirts Shelby and I got the girls for Christmas, our U17 Kubs girls came out strong against a good Killester team. In true playoff fashion, it came down to the last few seconds of the game. We pulled off the win by 1 point, 45-44. There was screaming, hugging and lots of tears as this is the first time this team has advanced to a Dublin Cup Final. The final will be played March 8th, so lots of time to prepare!

With our adrenaline still racing, we headed to the National Basketball Arena to watch the U20 Kubs boys team, coached by Eoin Chubb (our Trinity basketball coach!), play against a very good team. Much to our surprise, they held their own from the tip, and in the second half pulled away with about a 10 point lead. It seemed like the final 5 minutes crawled by, their opposition making valid attempts at a comeback. Kubs held their own and with hot shooting from 3-point range, won an exciting game!

Now two incredibly exciting games in, we stayed to watch our fellow Galway #VICTORY Scholar Chris play in the Division 1 final! After a slow start, the team made a dramatic comeback led by two key three’s from Chris—and again we were up on our feet cheering! The game went into overtime, Chris fouled out, and his team managed to pull off the comeback with an exciting finish! It was a great weekend for basketball in Ireland.

Finally back in our apartment, I found out that Merrimack had a huge win over #20 Adelphi. Holy Cross was down about 15 when I turned the game on, but with 30 seconds left, they were down 3! I thought my luck from the day was going to help them pull off the upset, but they are saving that one for the championship.

Overall, it was an incredibly exciting day that was tough to be on the sidelines for. My Meteors are back in action this Saturday when we play Shelby’s team again, going to be an exciting week!