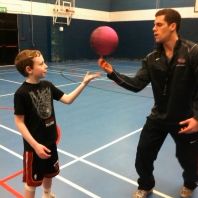 This past Monday was my first time in two weeks coaching my first years(12-13 years old) at Saint Mary’s because of exams and a mid-winter holiday. You remember these first years I mentioned a couple of months back? The ones who asked me if there was offsides in basketball and I had to show them where the out of bounds lines were. You remember them? Well those lads can now make 96 right handed lay ups in two minutes. They can also take a charge. Make it the length of the court in 5 dribbles. And they all think Saint Joe’s is the best college basketball team. Boy have they learned a lot in 5 months. Okay I will stop with the cheesiness. But being completely honest when I was first assigned this group, there were days in the beginning where I dreaded my cycle to St. Mary’s on a Monday afternoon. Then slowly the boys started to get what I was saying and started making progress. Wins and losses are great but as a coach seeing your team progress is something really special. The enthusiasm was there, if I was one minute late they would all be huddled around the equipment closet waiting for me to come with the key.

Anyways, back to this Monday and the boys were being very (choose your words wisely Chris) energetic. I figured because it was the first day back and they needed to let out some steam. I saved ten minutes at the end of the session to let them play a match, but the lads had other plans. So I decided we should get our conditioning in for the day 😉 They had to run 4 sprints and then I chose someone to shoot a free throw, if he makes it they are finished but if he misses they run again. The first guy missed and just as they are about to run again 3 of my favorite younger Titans walk through the door for their training after. One of the boys screams out “Titans Stink*!” Now the 3 titans boys are only 8,9, and 12 but they can really play. So I call over R, J, and D (they know who they are) to have a shootout from the FT line verse the 3 best Mary’s shooters. Some good natured banter was exchanged back and forth and then the shootout began. The first round ended in a tie so they had to choose 3 new shooters to go against Titans. Now we are all tied up 2 shots a piece and young R steps to the line, he is only 8 and all these guys yelling at him to miss are all 4-5 years older. He looked at me, his hands sort of trembling, I gave him a head nod reminding him that he’s got this! The shot goes up…and he missed.

This reminded me of when I was 8-9 years old and my older brother Eddie who was around 17 at the time would take me down to the park to play with him. I remember him asking to play 3 v 3 with some young teens and saying he only needed one more and they laughed at him because he was choosing to play with me. I vividly remember my brother saying, “I bet you we win and I bet you my 9 year old brother is better than all of you.” I know he is reading this and is saying to himself this probably never happened but this was a big point for me even if he brushed it off. Someone nearly twice my age instilling the confidence in me that I was better than these guys even if they were older and bigger. I couldn’t tell you whether we won or lost that game of 3 v 3, just like R might not remember if he hit or missed that shot. Since I don’t have any younger siblings, I look at all these kids as my little brothers and hope to give them the confidence my brother gave me. He likes to compare himself to Jake Shuttlesworth pushing young Jesus in “He Got Game”. I wouldn’t go that far Eddie!