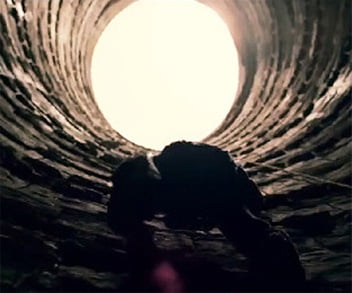 Watch this new advertisement/documentary from The North Face:

Unbelievable ad. Personally I think the guy is insane… but I can still respect the effort. It’s just wild to think Alex Honnold would attempt something that 99% of the world probably considers a suicide mission. But take a look at his face at the 5:30 mark… just pure ecstacy. I’m sure at that moment he was the happiest person on Earth.

The word surrounding this video is fear. The description, process, and comments about this project all come back to fear, and with good reason I might add. Most of us will never face such a pressure filled situation, but the concept of fear and motivation still applies to us in general.

Fear can be both paralyzing and empowering. As Honnold mentions at one point in the video, he simply went from anxiety and nerves to a “let’s do this” attitude. Something just clicked and he was over the fear, or at least had battled it down to a level where he could function and succeed.

Back to the paralyzing vs empowering issue, there are loads of stories that support either end of the spectrum. A paralyzing fear, for example, may be a soldier in a war zone who shuts down under the incredible stress and terror around him. Conversely there are soldiers who ‘accept their fate’ and the prospect of death to accomplish absurd acts of heroism in the face of danger.

Point being, fears are what you make of them. They can crush you or motivate you. The fear of failure can be especially powerful. When you feel the fear of losing a championship game maybe you start playing insanely intense defense. When you feel scared about an approaching final exam maybe you study 8 hours a day for a week straight. Maybe you’re scared you’ll never see that beautiful girl again, so you work up the courage to ask her on a date. Whatever it may be, fear can elicit a powerful response in us. One that we can use to succeed.

Little pop culture reference: kind of corny but this talk about fear reminds me of Batman The Dark Knight Rises, when Bruce Wayne is stuck in prison and his only way to freedom is to climb out:

At first Bruce is told that the reason he fails to escape is fear… he responds that he’s not afraid. A moment later, however, we’re told that a LACK of fear is what may be holding him back. He wrongly assumes that being afraid was a negative, and could not be used as a positive. Yes it’s a movie and the hero has to succeed, but I like the message the old man gives Bruce.

“Use fear to your advantage, don’t let it hold you back. Fear can only cripple you if you’re willing to bend to its will.”

When you feel the fear rising inside you acknowledge it. Feel it. Understand it. And use it to propel you to accomplish great things. Alex Honnold sure did.