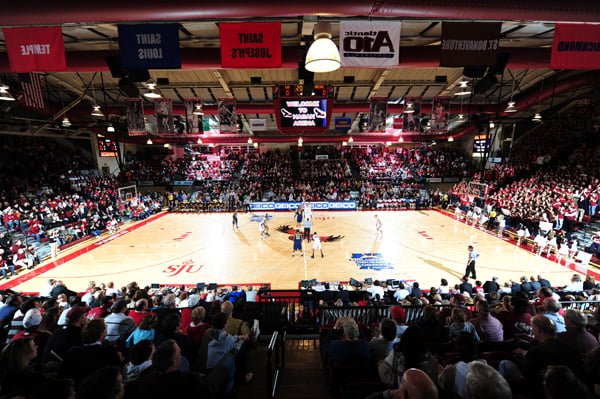 This weekend Saint Joe’s squared off against Lasalle in their first of 2 regular season Atlantic 10 match ups. By no surprise the Hawks took down the Explorers on their home court. If some of you don’t know, I live with fellow scholar Michele who played for Lasalle and all I have had to hear all year was how amazing the run to the sweet 16 was last year and how they are going to do it again this year. I am sick of it! (Just kidding, I am totally jealous that I never made the Big Dance) Although 2 NIT appearances could equal 1 NCAA tournament?! Anyone agree? Is anyone out there? Bueler? K, didn’t think so.

However, my hawks are having a great season at 17-7 and are projected first four out of the tournament currently, but still a lot of ball to be played. Lasalle is a really good team as well but just not living up to the expectations. The two teams will meet on Hawk Hill in the last game of the regular season and Michele and I decided to put a little wager on the game. Since we are still broke college students living in Europe, monetary bets were out of the question. We talked about the other having to get a tattoo of the other teams mascot. But after getting the Titans logo tattooed on my arm, I don’t want to go through that pain again. ( I wish I could see my Dad’s jaw drop when he read that last line! Obviously joking!)

So we decided that the loser has to wear the other teams gear all week long. We both have plenty of t-shirts, shorts, sweatshirts, and pants so that won’t be an issue. The only issue I am worried about is not getting made fun of for the Lasalle gear but rather for how tight Michele’s clothes might look on me. But that is a moot point, because I think Michele will look fab in the crimson and gray. March 9th can’t come any sooner. The Hawk Will Never Die.