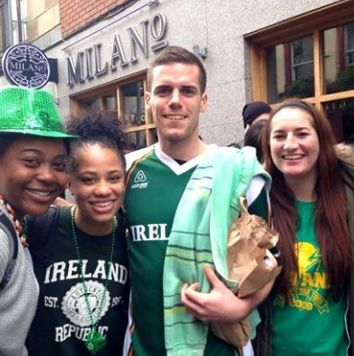 My weekend started off Friday night when Michele and I went to a white collar charity boxing event in Galway to see our classmate Conor “Hurricane” Halloran throw some haymakers. This was the first boxing event I have ever been to but despite most being first time fighters it was very entertaining. My favorite fighter was Tommy “Beefcake” O’Brien…5 foot 7 and a generous 260 pounds. This dude had the reach of a raptor but when he landed them, WATCH OUT!

Saturday afternoon the town was buzzing for the rugby 6 Nations final. Over the course of this 6 Nations tournament (Ireland, England, Wales, Scotland, France, and Italy) I have really taken a liking to rugby and have watched every match. The Irish won in dramatic fashion and the place was going wild. So if we are keeping count at home I am taking an interest in boxing and rugby, my mother is loving this I’m sure!

Back to the sport I am actually decent at and will keep my brain cells intact. On Sunday we hosted Bord Gais Neptune, last years National Cup Winners and 3rd place in the premier league. Since we won the National Shield we were bumped up to play in the Premier League playoffs. This is the first year they are using this system and Basketball Ireland thought it would just be a nice gesture to let the little guys from Division 1 play a game against a Premier League team. However, we were having none of that. Talking to people in the basketball community they listed us as 15-20 point underdogs but I liked the way we matched up and we were saying all week that we were going to win. We opened up the game on fire and took a 16 point lead at one point in 1st quarter. Neptune started playing a Box and 1 on me, which I haven’t had done since I was in the 8th grade playing for Good Shepherd CYO. I took it as a compliment and the other guys kept on rolling. They chipped away at the lead but we hung right in there and pulled out the victory 86-82. We are now in the Premier League Final 4 on Friday night in none other than Neptune Stadium against this years Cup Winners C&S Blue Demons. It is going to be a tough game but the way we are playing right now no one can stop us. Sort of the way my SJU HAWKS are playing right now. A10 Champs and a first round matchup vs UCONN on Thursday night.

Oh, and then there was Paddy’s day in Dublin. That was fun too I guess…