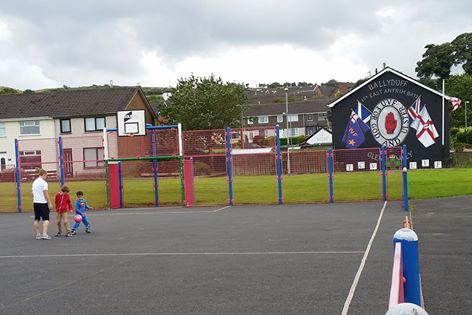 I waited for Khalid to de-board the plane (we began the journey in Newark) before successfully passing through customs. Walking down long and unfamiliar halls unsure what to expect around the next corner, then we saw a small, extremely energetic woman quickly approaching us and introducing herself as Aimee, whom I had known as a.shiels@sportchangeslife.com over the past few months.

Aimee asked if we had seen the other scholars, whom I did not even realize were on our same flight. We found Caroline then Ashley and were on our way. At this point I was buzzin’ (as they say here N. Ireland). I walked around the car to get in the passenger’s seat before realizing that I was on the wrong side of the car, where I am rather useless given that I have never driven on the left side of the road, right side of the car or with a stick shift.

We soon arrived at our beautiful new home and campus at the University of Ulster, Jordanstwon. After dropping the bags at our accommodation (another new term for our room), we went for a quick tour of campus. Next we had the opportunity to work our first camp on this side of the pond. I couldn’t have been more excited as we arrived in Ballyduff (Northeast section of Belfast).

The camp was a blast, although I could hardly understand a word the children were saying. I felt like I was back in Brazil trying to understand Portuguese, but this time the children were speaking the language I grew up speaking. When camp came to a close we returned to our flat (another word for apartment) for dinner before we departed for a second camp. Luckily, the SCL staff strategically kept us awake to avoid the potential jetlag.